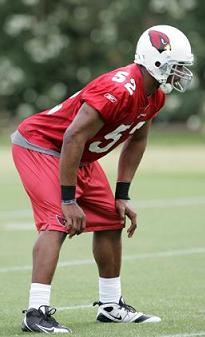 Hat tip to Pyromnc (below) for breaking the news.

The Arizona Cardinals have signed second round pick Cody Brown to a four year contract today. Brown, a former defensive end at the University of Connecticut, was selected by the Cardinals in the second round. Over his final two season at U-Conn Brown amassed 33 tackles for loss and 18.5 sacks while becoming the most explosive defender in the Big East Conference. The financial terms of the deal were not released (but they'll most likely leak out before the end of the day).

In order to make room for Brown on the roster the Cardinals released undrafted rookie Tony Davis. Davis, a corner/safety from Penn State. The only remaining rookie left to be signed in Chris Wells and according to GM Rod Graves, talks are ongoing and progressing. Players officially report to camp tomorrow (Wednesday) and there will be a conditioning test on Thursday but the first actual practice is not until Friday.