The first full day of Arizona Cardinals training camp is almost underway with the first practice set to begin in just over two hours from now. Today will be the first, of six, two-a-day practices. Yesterday everyone completed the conditioning test and it was the first year, under Whiz's watch, that every single player passed and some were even able to let up at the end. Yesterday's story lines basically boiled down to Chris "Beanie" Wells and Anquan Boldin, although there are several mentions about Alan Branch impressing some people during the conditioning test. According to Darren Urban, Branch was even leading the pack of lineman during a portion of the drill. On to the bigger stories: 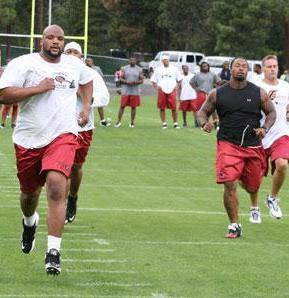 Beanie Update: Negotiations were ongoing last night and talks were "substantive." There is hope that a contract is close and some have suggested that the two sides wouldn't have talked into the night if a deal wasn't close to being completed. I'd expect the deal to get done very soon, maybe even sometime today, but even if they're signing on the dotted line right now, Beanie would miss both of today's practices. Saturday and Sunday are afternoon practices and Monday will be the second two-a-day so him being ready by Monday at the latest would be ideal.

Boldin Happy?: Boldin spoke to the media yesterday and his demeanor was much different than the 'trade me now' procloamation from last year's training camp. Here's roughly four minutes of audio from his exchange, thanks to KTAR. Overall it doesn't really sound like anything has changed in Boldin's stance but I think he's finally accepted that there isn't much he can do to change his situation right now. With that in mind, he sounds like he's just going to leave it up to his new agent and focus on being one of the best players on this team. I wouldn't look for him to be hosting Rod Graves or Michael Bidwell at dinner any time soon but at least he won't be spouting off to the media everytime someone sticks a microphone in his face. Maybe seeing Adrian Wilson rewarded for his loyalty has struck a cord with Q and he'll follow the same path.

Stay tuned and we'll have some wrapups from the early practice today and hopefully some news on the Beanie front. It'll be interesting to see if Spach and Iwebema are on the practice field and if Gabe Watson is limited at all.