It's been a while since we formally welcomed new comers to Revenge of the Birds so what better day than our preseason opener to take a second and simply say welcome. ROTB, as we like to call it, is a site built by the fans, for the fans and that's about it. We are committed to bringing each and every Arizona Cardinals fan the most complete coverage on the net, with our own little "homer" twist. Make no mistake about it, we're not trying to be ESPN or NFL.com or any other main stream media outlet. First and foremost, we are fans. With that being said, here is a quick introduction to ROTB's world: 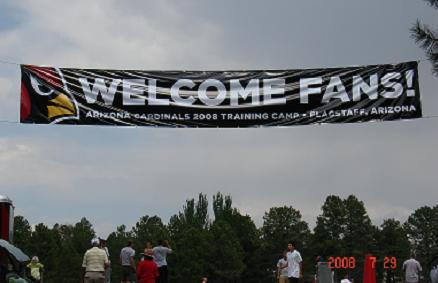 So enough of tooting our own horn because this thread is about all of the 'newbies' at ROTB and what you can expect to find this season at our site. Our goal during the season is to become your 'one stop' experience for any and all Cardinals coverage. Who's injured? Who's Overperforming? Who's Under performing? Why on earth did Whiz not go for that crucial 4th down? Anything and everything Arizona Cardinals related can be found right here. We'll have injury reports, key match-ups to watch and most importantly game coverage that won't find anywhere else. ROTB's coverage of each Cardinals game will include a key match-ups, keys to winning and a 'chat with the enemy when we'll talk to a rival site to get their view on the game, but our best coverage of the game won't kick in until the actual day of the game. As you'll see tonight we have an open thread during the game that will allow you to connect with fellow Cardinals fans and a post game thread for you to 'cuss and discuss' the game before laying your head.

All of this has been an extremely wordy way of saying welcome to all of ROTB's new members as well as an invitation to all of those 'lurkers' who read ROTB but have never signed up and joined the party. Signing up is extremely easy and contribution only makes us grow stronger. You don't have to be a writer or even opinionated to join the group, you just have to be a fan. It's really that simple. So to those who have helped ROTB become what it is today, thank you. And to those who are new to our site or those who are on the verge of joining the group, welcome and hopefully the upcoming 2009 season will give us even more reason to celebrate.

Finally, if you're new to ROTB or just haven't told your story in a while, feel free to introduce yourself to the group. Who's your favorite player? When did you become a fan? Why the Arizona Cardinals?