Last week we broke down the first 4 games of the Arizona Cardinals season, and at that point, they were 3-1. While it seems like it could be a good start, a few Cardinal homers feel like starting 4-0 is very possible. Either way, the Cardinals will need a strong start to the season, as the rest of the NFC West, let alone the entire league, will be gunning for them right away. Nevertheless, the next four games are as follows: 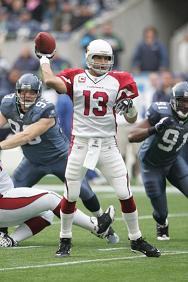 Analysis: Last year Seattle tried harder to keep players healthy rather then win, evidence being their 4-12 record. At times they were searching for back ups for their back ups, and were bringing in new players on a weekly basis. With that in mind, they went out in search for a receiver that could fill a hole that was gaping last year, and also brought in some defensive talent. This year the Jim Mora Jr regime begins, and there is sure to be an adjustment period. The Seahawks hope to get back to their winning ways, and it starts by dethroning the defending NFC West champs.

What to watch for: The Cardinals will be going into their 2nd game on the road in 2009, and Seattle is known for giving road teams problems. The "12th man" is sure to be there, and that means false starts for the Cardinals. If they can avoid these and win in a place that's always been a tough place to win for them, it's a good sign for things to come. If the Cardinals do win on the road in Seattle, which would be two years in a row, this is the true sign of the changing of the guard in the NFC West.

Key Match Up: Adrian Wilson vs Matt Hasselbeck - Hmm, I feel a repeat of last year on the road in Seattle ; )

Prediction: Win - At this point the Cardinals are beginning a stretch of tough games, and need a win against a division rival.

Analysis: The Giants began 2008 as one of the best teams in the league and up until Plaxico Burress shot himself in the leg, they were. After the loss of Burress, Eli's go-to man, he wasn't the same, and neither was the offense. This year they drafted Hakeem Nicks, hoping to replace Burress, who was released this off season. They also looked to add significant depth to the defensive line. There's no doubt that the Giants will be fired up in this home game against the defending NFC champs.

What to watch for: The most interesting factor to look out for is the battle in the trenches. New York has one of the top offensive lines in the league, and it will be very difficult for the Cards defensive line to battle it out. If they can stop the run and pressure Eli Manning, it would surely give them the W. On the flip side, the Giants have a very aggressive defensive line and have Osi Umenyiora returning. If the Cardinals offensive line can protect Warner and open up holes for the running backs, expect the Cardinals to remain in this game.

Prediction: Loss - Although it's not an early game, it's still a road game against a very good Giants team.

Analysis: Carolina was one of the best rushing teams in the league last year with their version of "smash and dash", and while their passing offense was suspect, it got the job done. They were aggressive on the defensive side of the ball, and had great talent in Jon Beason and Julius Peppers. Everything seemed to be going their way until they ran into the Cardinals in the playoffs. Numerous turnovers and the inability to stop Larry Fitzgerald ended their season. Other then adding some defensive depth in the draft, not much has changed, and John Fox still has confidence is Jake Delhomme. The Panthers will surely try to build off of last years team, and make another run in this year's playoffs.

What to watch for: This will be one of the toughest tests for the Cardinals defense, as they face a very good rushing offense. If the Cards can repeat what they did last year and get ahead early, it will put all the pressure on Delhomme's shoulders, which we all know hasn't worked out that good in the past.

Prediction: Win - Playing against the team at home that dominated them in the playoffs will be a huge factor for the Panthers.

Analysis: The Bears haven't rebounded from losing the Super Bowl three years ago, and appear to have a new look since then. They feature a different starter at quarterback, running back and wide receiver, then they did that year, and hope to build off of a mediocre season last year. They hope that Cutler is the answer at quarterback, and that he and Matt Forte can vastly improve their offense. On the defensive side of the ball, their solid with the veteran leadership of Brian Urlacher.

What to watch for: The immediate sign to watch for is how the Cardinals handle playing on the road in a considerably cold weather game. The Cardinals may want to jump out to an early lead and pound the ball by running up the middle, and drain time off of the clock. Watch for Beanie Wells and Tim Hightower to get a decent amount of carries in that game.

Key match up: Devin Hester vs Dominique Rodgers-Cromartie- Two speedy players with pivotal action. This should be interesting to watch. Another key match up is Beanie Wells taking on Brian Urlacher.

Prediction: Loss - It hurts to predict this but this may be the upset of the season. The Bears can be dangerous and we don't know right now how the Cardinals will perform on the road in 2009.

While it may come as a surprise to some, 5-3 seems very likely. This set of four games is a very tough stretch and if the Cardinals were to come out 2-2, it would be successful. It may also mean first place in the division, a place the Cardinals stood this time last year. What do you think so far? Is 5-3 out of this world? Is there another key match up that nobody else agrees with?