Arizona Cardinals vs San Diego Chargers: Who will have the biggest impact?

Share All sharing options for: Arizona Cardinals vs San Diego Chargers: Who will have the biggest impact?

Last week we voted on which rookie would have the biggest impact in the preseason opener, and LaRod-Stephens-Howling received the most votes. The actual winner would be Michael Ray Garvin, as he was very 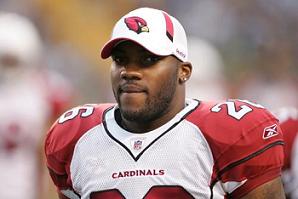 impressive returning kicks for the Cardinals. Unfortunately, we won't see him in action for at least 2 weeks due to knee surgery. This week the Chargers come to town, and there's sure to be a few players that stand out to the fans. While they may not be Kurt Warner or Darnell Dockett, it's likely that guys who or vying for a job will put it all out on the line. Here's a look at the nominees...

Lance Long: Last week, Long quietly caught 5 passes, for 48 yards. It went unnoticed to most, but if Long is able to do this all preseason, it gives him a better chance to make the final cut(although it's never easy to make the cut at wide receiver on the Cardinals). Long is a quick, small receiver, that could eventually become a mold of Wes Welker.

Matt Leinart: Leinart will be playing with the 3rd string offense, and will likely get a little more playing time in this game. That means he'll also be going up against a 3rd string defense of the Chargers, which means he shouldbe up better numbers. Last week Leinart came out rusty, but was able to settle down a drive later, and march to the Steelers endzone before turning the ball over on downs.

More players after the jump...

Calais Campbell: For most of us, Campbell came out of the gate, looking very aggressive on defense against the Steelers. He broke through the backfield to make a couple tackles, and nearly recorded a safety in the end zone. Campbell may get a little more playing time, and it should be interesting to see more of Campbell against the Chargers offense.

Greg Toler: Toler made some plays on defense last week that showed his upside. He also showed his lack of finishing, as he gave up on the play a few times. We haven't seen his true potential yet, and he may not get much action during the regular season. In just his second game of his career, we may see what was so impressive about him in training camp.

Beanie Wells: If this was "Who are you looking forward to seeing the most?", Wells would be it, but this is for who will have the biggest impact on the game. Wells has been tagged with an aggravated ankle for most of training camp, and was forced out of last weeks preseason game. He's already said he expects to play on Saturday, and if he does, he could have a significant impact on the game.

Tim Hightower: The other running back, Hightower, came into 2009 in a storm. He started the year by cutting 20 pounds, then a fire was lit under him after the Cardinals drafted Wells. Hightower feels the starting job is his, and wants to prove it this year. Last week there was a noticeable difference in his running, as he did less dancing around, and more cutting up the middle. If Wells is not able to play, I'd imagine Hightower will get more playing time tomorrow.

Brandon Keith and Herman Johnson: Both young lineman should get a decent amount of playing time on Saturday, and both will be protecting Matt Leinart's blindside. In the Steelers game, they did get good reviews, and both looked solid. They will need to make an important impact to not only protect Matt, but to open holes for LaRod Stephens-Howling, and possibly Beanie Wells.

Tomorrow the Cardinals take the field, and even though it's only a preseason game, it's very important to the players trying to make an impact, let alone make the team. Seeing as it's the preseason, it's tough to predict who will have the biggest impact on the game, and they may not even be on this list(see Tyler Palko). But who do you think may have an impact on the game? Who are you looking forward to see play?