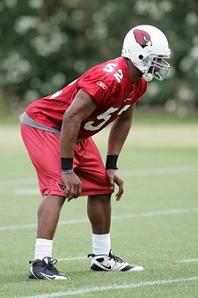 After suffering their second loss of the preseason, the Arizona Cardinals received news that their rookie linebacker, Cody Brown may miss the entire '09 season. The news broke after Saturday's game, but the Cardinals have yet to discuss the severity of the injury. The injury took place against the Chargers when Brown injured his wrist. It's a rare injury and that may be the possibility as to why the Cardinals have yet to address the media. Ken Whisenhunt is supposed to talk about the injury today after practice. Cody Brown's agent Nate Haber stated the below via Twitter:

It appears to be a devastating, rare injury that will sideline him for his rookie season. He is staying strong in this tough time and will do everything he can to return stronger than before.

The Cardinals originally drafted Brown in the second round of this year's draft, hoping to bolster a defensive unit that struggled with establishing a consistent pass rush last year. Brown had yet to make a difference so far this off season and preseason, and it appears we won't see what Brown could really do till next year. Luckily, after Saturday, we may not have anything to worry about after the 1st team defense registered 4 sacks in the 1st quarter on Saturday. What's your take on this? Does this set the Cardinals defense back for '09, or will it be better for Brown to learn from the sideline for his rookie year?

Update #1: There hasn't been any official word from the team yet but Brown's agent has indicated that he dislocated several bones in his wrist during Saturday night's game and even though the bones were put back in place that night, he'll need surgery once the swelling decreases. The early timetable on his recovery is anywhere from four to six months meaning Brown will be placed on injured reserve if this information is correct. Ken Whisenhunt is scheduled to meet with the media shortly this afternoon and we should be the official word at that time.