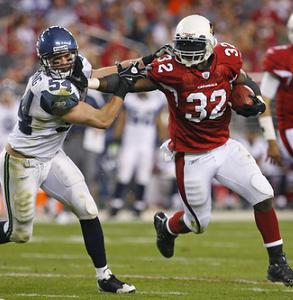 Multiple reports from around the league state that former Arizona Cardinals running back Edgerrin James will sign a one year deal with the Seattle Seahawks adding to a continuing trend of NFC West players shuffling between teams.

This may be a sign of some undisclosed trouble in the backfield with the running backs currently on the roster. The Seattle Seahawks currently employ the talents of Julius Jones as the starter and T.J. Duckett to handle many of the goal line duties. Jones missed the last preseason game with an undisclosed injury and T.J. Duckett got the nod and carried seven times, but never gained more than 5 yards. An official statement should be released in the morning and Edgerrin James could report to practice as early as Tuesday's 11 a.m. practice.

The question remains if this preseason signing is a sign of trouble at the Seattle RB position? An undisclosed injury to Julius Jones? Or just a new approach at RB by the Seattle front office?

It will be interesting to see how the Arizona Cardinals defense deals with their former teammate this season.