Last week was the second week of predicting the Arizona Cardinals record for the 2009 season. 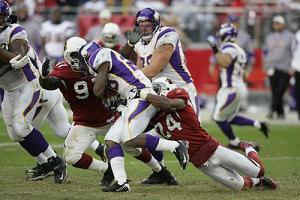 At the midway point of the season, the Cardinals look to be 5-3, which most may agree is a very respectable record, and may have them at 1st place in the division at that point. Last week's may have also been the toughest stretch of the season, and the Cardinals are projected to finish 2-2 in that span. This week, things are similar, as the Cardinals begin with 2 division rivals, followed by two competitive games.

Analysis: As stated in part 2 of this segment, Seattle enjoyed a swarming amount of injuries in 2008. They lacked 2nd stringers to cover for their 1st stringers when the injury bug attacked. Seattle hopes to be fully healed in 2008, yet long time, future hall of fame offensive tackle, Walter Jones, has already had back problems this offseason, and is about to go through knee surgery which will take him out indefinitely. Seattle gets a healthy Matt Hasselbeck back at the helm of the offense, and added a wide out threat in TJ Houshmandzadeh.

What to watch for: After predicting a win for the Cardinals on the road in Seattle already, the Seahawks will be heading into this game, hoping to get their revenge. If all stars are healthy, we should be in for a good showing. At this point in the season, the Cardinals may be looking to secure a playoff birth, and getting this against a divisional opponent would be nice. Watch for a competitive game, as Hasselbeck likes to play tough against the Cardinals year in and year out.

Prediction: Win - If the Seahawks can't beat the Cardinals in Seattle, what makes it different in Arizona?

Analysis: For the last two years, the Rams have mustered together a dismal 5-27 record. Hoping to erase recent memory, the Rams hired Steve Spagnola, former defensive coordinator from the Giants, to lead their team to the promise land, and a respectable record. They've also broken away from the past, recently releasing long time veterans, Tory Holt, Orlando Pace, and Corey Chavous. The Rams goal for 2009 is to put together a tough team, that remains competitive in every game. If this is possible, we may see something different then what we've seen in years past.

What to watch for: The Rams spent a lot of money this offseason trying to revamp their offensive line that's been unable to protect the quarterback the last few years. Watch for a battle between the Cardinals defensive line and the Rams offensive line. We'll probably see a warm welcoming for Kurt Warner as usual from the St. Louis fans.

Prediction: Win - Until they prove otherwise, the Rams defense won't be able to stop Kurt Warner and the offense.

Analysis: Last year, Tennessee began with a perfect record, establishing themselves as the best team in the league for the regular season. They lost in the playoffs against a tough Baltimore defense, and hope to build off of last year. They didn't do much this offseason to do that, as they allowed Albert Haynesworth to sign a $100 million dollar contract with the Washington Redskins. They still remain secure on defense, with a quick secondary, and a lot of experience between the linebackers and the defensive line. The big question mark is offense. Their version of smash and dash went through a divorce this offseason, and they have an aging vet at quarterback(which we all know isn't a bad thing). With a 3rd string wide receiver at best in Washington, and a rookie in Britt, their offense may be the deciding factor of how successful 2009 will be for the Titans.

What to watch for: The Cardinals will face two former Cardinals of the "not so glory days" in Dave McGinnis, the Titans linebackers coach, and defensive end Kyle Vandenbosch. Another headline I'm sure we'll hear about is the battle between the two grey beards. This should be a battle in Tennessee and a potential Super Bowl 44 match up. ; )

Key Match up: Gerald Hayes vs Chris Johnson and LenDale White - Hayes will have his hands full.

Prediction: Loss - Playing the Titans in Tennessee is never easy, and it especially won't be for the Cardinals.

Analysis: The Vikings ended last year on a sour note, losing to the Eagles on their home turf. Aside from that, they were one of the best rushing teams in the league, mainly due to having the best running back in the league in Adrian Peterson. They also featured a fierce defense, possessing the best defensive line in the league. The biggest problem facing the Vikings was the lack, or lack-thereof a quarterback. Tavaris Jackson was thought to be the quarterback of the future for this team, until they found out he was playing not to lose. They experimented with Gus Frerotte but he didn't perform any better. Up until this week, they thought that Sage Rosenfels was going to be the answer, until they signed Brett Favre. With Favre at the helm, they may have just became one of the biggest threats in the league. Only time will tell if this works, and we may see a repeat of what Brett did last year with the Jets.

Prediction: Win - This game could go either way. The Vikings beat us last year in our place, but hopefully the Cardinals learn from getting too comfortable with a lead in their division.

The Cardinals go 3-1 in part three of predicting their record, and it could have been worse. Squeaking out a win versus the Vikings can happen, and at this point in the season, the NFC West may all be a wrap. What do you think of the record so far? How likely is it that the Cardinals get revenge on the Vikings?