In our last segment of the All-Cardinal team, we ended with the cornerbacks. We're now up to safeties, and the decision seems to be made already. I wanted to keep the open polls going to select the entire team, but I think everybody will agree that these two are locks at their positions. The two Wilsons, Adrian and Larry, beat out any other nominee I could think of by a long shot. One's already in the Hall of fame, and the other has cemented himself as a CFL(Cardinal For Life). Here are the starting safeties for ROTB's All-Cardinals team:

Wilson was originally drafted in the 3rd round of the 2001 draft. Unbelievable, 13 other defensive backs were taken before Wilson that year in the draft. A-dub's always been a force on the defense, and as we all know, the D just isn't the same if he's not on the field. Whether it be a pick or a big sack, he's generally around the ball carrier making big plays. His recent 5 year deal will keep him as a Cardinal till he's 35, which is generally the age of retirement. He's currently in the prime of his career and coming off another pro bowl year. He's also 13th overall for career sacks, but 1st for a defensive back for the Cardinals franchise. He's also a member of the 18/18 club with 18 sacks and 18 interceptions. Wilson has said he wants to reach the 30/30 club before he retires which is certainly possible. One things for sure, Wilson is currently the longest tenured Cardinal and it seems he will finish his entire career as one. 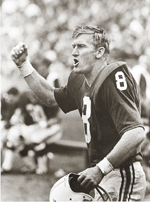 Wilson is arguably a lock for the FS position on our All-Cardinal team. He could also be a lock on a top 10 draft steals if we had one. Wilson was not taken until the 7th round of the 1960 draft. He began his career at cornerback but found his groove when he was finally moved to free safety. Wilson was one of the very few defensive backs at the time to blitz the quarterback. Named after his nickname, the "Wildcat" play was intended for Wilson to blitz the quarterback at certain times throughout the game. It caught many off guard as defensive backs were not primarily known for blitzing, which hasn't changed much since then. Wilson was also known for his ball-hawking skills as he picked off 52 interceptions during his career. One of his most notable stretches was when he had at least one pick in seven straight games during the 1966 season, which is also when he led the league and finished with 10 total that year. Wilson will indeed remain one of the Cardinals greatest defensive backs ever, let alone greatest in Cardinals history period.

The defensive backs are in the books and we have linebackers, special teams, and the head coach next. Our goal is to get the All-Cardinal team completed before the season starts. What do you think of the All time safeties? Is there anybody that stands a chance to these two?