With the start of the 2009 preseason only less then a week away, now's a good time to break down the regular season and predict a record for 2009. Last year, many of us figured a realistic record would be 9-7 or 10-6, and their actual record fell along those lines. This year, the schedule becomes more difficult, coaching changes are made, and different personnel and schemes are brought in that can make predicting a valid schedule very frustrating. This season is s 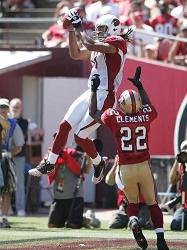 ure to feature its ups and downs, upsets and surprising, and many more unknown scenarios. Let's break down the schedule and attempt to bolster a reasonable prediction for the Cardinals 2009 record. We'll do 4 weeks at a time until we have the complete 16 game record complete.

Analysis: When Mike Singletary took over the 49ers last year, it took a couple of games, but Singletary was able to spark a fire under the 49ers and make them one of the most competitive teams towards the end of last year. That fire is sure to continue on this season, and should create a great season opener as the Cardinals and 49ers have opened the season together the last 3 years together.

What to watch for: The most obvious things to watch for would be how Beanie Wells handles his first regular season game, as he should get a good amount of carries against a physical defense in the 49ers. We should also watch out to see if Larry Fitzgerald's momentum from the playoffs continues into this season.

Prediction: Win - Cardinals coming off a Super Bowl run, at home, should be too much for the 49ers.

Analysis: The Jaguars had high hopes last year after coming very close to the Super Bowl in 2007. They were also one of the very dominant rushing teams that year. Things changed last year when injury, and inconsistency at the quarterback position hit them. They lost Fred Taylor but Maurice Jones-Drew looks to lead the team in the running game. The Jaguars are still a very dangerous team and have the right tools to make week 2 a very competitive one for the Cardinals.

What to watch for: This will be the first game on the road in 2009 and as we all know, the Cardinals have never played well on the road in the past. Although they surprised us against Carolina in the playoffs, winning on the road week 2 should be a challenge. If they can overcome the road games early, it should be a good sign for the 2009 season.

Prediction: Win - Too many holes on the Jaguars and virtually no chemistry will give the Cardinals the edge.

Analysis: The Colts took 5 games last year to get back to playoff football. Things won't be the same this year as Peyton Manning is healthy heading into the season. The loss of Harrison shouldn't have too much of an effect on the offense as the Colts have virtually been without him the last couple years. The main factor that could give the Colts problems is the loss of long time head coach, Tony Dungy. There will be an adjustment but expect their top offense and quick defense to show up when they come to University of Phoenix Stadium.

What to watch for: Peyton Manning. The entire Cardinals defense will need to be watching Manning if they have a chance at winning the game. Manning can pick any defense apart with his superb quarterback skills. If the Cardinals can stay focused and not commit any mistakes, look for the upset.

Prediction: Loss -  Unfortunately, banking on not committing mistakes is not smart, and the fantastic offense of the Colts will be too much for the Cardinals.

Analysis: After another average season, the Texans hopes are high heading into 2009. They have continued to fit the right pieces into place for the last few years, and seem to finally have most of the puzzle complete. They've built a solid line and built everything around it. They found a steal in last years draft in Slaton, have one of the best wide receivers in the game in Andre Johnson, and if Shaub is consistent, they're offense is set. If they're defense can adapt and improve off of last year, this team will be a contender.

What to watch for: This is surely going to be a hyped match up as the top two wide receivers in the NFL meet up. Expect many breakdowns and predictions for who will have a better performance, along with who the best receiver is during the post game news.

Key match up: No brainer...Larry Fitzgerald vs Andre Johnson

Prediction: Win - The Texans are still too inexperienced and will have trouble facing the Cardinals on their home field.

It's not a bad start to the season and if the Cardinals are able to pull it off, this should surely jump start them to a lead in the NFC West. The only problem with that is keeping their number one spot as the other three teams will be gunning for them. We'll break down weeks 6-9 next week but what would you think of their record so far? Could you see it going any other way?