For the last three weeks, we've spent some time breaking down what the Cardinals record may be for the 2009 season. Over the weeks we looked at each game of the Arizona Cardinals schedule, and broke d 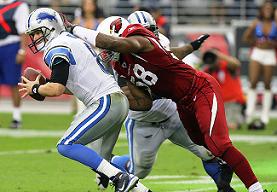 own each team they will play. You can see parts part 1, part 2, and part 3 right here, where you'll see that the Cardinals record at this point is 8-4. In part three, the Cardinals came out 3-1, only losing to the Titans. During this next stretch, they face 2 division opponents, and two others from the NFC North. So to finish our segment before the season begins, here is the final part of the prediction for the Cardinals 2009 record.

Analysis: After Mike Singletary took over for the 49ers last year, he immediately made a difference, and since then, he's stamped his identity on this team. He's created a tough and smart football team over at 49er camp. Although the 49ers are one of our rivals, you have to respect what Singletary has done for them at this point.

What to watch for: In their first match up, I gave the Cardinals the win at home, as they were opening the season after their Super Bowl run against a division rival on their home field. This time, the Cardinals travel to San Francisco, where the 49ers can play very aggressive against road teams. It's also on the Monday night stage, where both teams have played very cutthroat in the past. Expect a lot of emotions to come out as this has become a great rivalry.

Key Match Up: Chris Wells vs Patrick Willis - This would be a very exciting match up on the national stage, as our bruising rookie running back takes on their Pro Bowl hard hitting linebacker.

Prediction - Loss - Last year the Cardinals barely escaped a win over the 49ers at home. This year I'd expect us to split the series, with each team winning at home.

Analysis: There's not much to say after a team goes 0-16 during the regular season. The Lions just plain stunk last year. This year proves to be a different experience for a team that's struggled in recent years. As you can see, they've cleaned house and started fresh. It began in the off season when they hired Titans defensive coordinator, Jim Schwartz, as their head coach. They also took the next step in rebuilding their team, in drafting a franchise quarterback by the name of Matthew Stafford. The team can only improve from last year and anything more then 4 wins would be a success.

What to watch for: By the time the Cardinals head to Detroit at this point in the season, they will likely be vying for a playoff berth. On the other hand, the Lions may just want to play spoiler. Another thing to watch for is Calvin Johnson. He's already been regarded as one of the best wide recievers in the NFL at this point in his career. Watch to see how DRC handles himself against the tall receiver. If Stafford is in the game at this time, watch for the Cardinals defense to try and rattle the rookie QB.

Key Match Up: Adrian Wilson vs Matthew Stafford - If the rookie is starting at this point in the season, he has a big arm and likes to air it out. Expect Wilson to drop in coverage a few times but also layout Stafford a few times in the backfield.

Prediction: Win - It's simple, the Cardinals will be fighting for a playoff spot at this point in the year and the Lions will not be.

Analysis: After dusting off the cob webs and bringing in some youth, the Rams look to another challenge in '09, WIN. The last two years have been struggles for this Rams team that used to be the greatest show on turf. With Spagnola at the helm now, we may actually see a division rival actually become...a division rival.

What to watch for: The Rams come to University of Phoenix Stadium with hopes of knocking off a divisional opponent. Unfortunately, they haven't played that well there in the past, and will likely have some difficulty. The Cardinals will be ready for this game, hoping to catapult themselves into the playoffs with a win.

Key Match Up: Gerald Hayes vs Steven Jackson - Last year Hayes swarmed Jackson when the Rams came to Arizona. Will Jackson have revenge on his mind?

Prediction - Win - The Cardinals may need this win more then the Rams will at this point in the season.

Analysis: The Packers had high hopes last year, after coming off an NFC Championship appearance. Unfortunately, it didn't translate into the 2008 season. While they had a good offense in '08, they suffered injuries that caused them to lack a rushing attack to go with their passing offense. The defense was the obvious weak spot, as they gave up a significant amount of points and were playing catch up most often then not. This year they bring back their explosive offense, and most are healthy. Aaron Rodgers has looked amazing at this point in the preseason, and they outscored their opponents in each game. They brought in Dom Capers and drafted DT B.J. Raji to improve their defense, and it's already showed as they've forced numerous turnovers and have limited their opponents scoring so far.

What to watch for: Watch for the Cardinals to head into this game with revenge on their minds. Even though it was only the preseason, the Packers put a shellacking on the Cardinals first team offense and defense. Expect to see fireworks in this game as the Cardinals defense would like to get after Aaron Rodgers.

Key Match Up: Dominique Rodgers-Cromartie vs Packers Wide Receivers - After getting embarrassed in the preseason, we can only expect DRC to come out with something to prove in this game.

Prediction - Loss -Although the Cardinals will likely play differently this game, the Packers look to be much better in '09 and will be playing aggressively in their last game of the season, as their division will be competitive.

So after the final four games, the Cardinals finish their 2009 season at 10-6, which will likely land them with another division title and a playoff berth. Although you could easily mix and match some wins and some losses, 10-6 may still be the record, with 9-7 or 11-5 not that far out of the question. Although I'd like to see them go 16-0, I can live with the projected record if it happens. As far as anything less, the Cardinals would have to have a complete meltdown or a massive amount of injuries. What's your take on a final record of 10-6? Do you think the Cardinals would do better or worse?