Casting For The Cardinals: Larry Fitzgerald

Share All sharing options for: Casting For The Cardinals: Larry Fitzgerald

Last Sunday we began the first of many segments to cast for a movie about the Arizona Cardinals. Every Sunday I'll find someone else that can play a part of the Arizona Cardinals if there was ever a hit movie created about the team. Obviously something like this would never happen, but we're dead in the middle of the NFL offseason with nothing better to talk about. Plus, feeding the imagination is always a fun thing to do. Just imagine what else you'd be doing today - reading another article about Matt Leinart being a bust, or one about the San Francisco 49ers being the favorite to win the division - not fun stuff.

The first role in the movie that we casted was for head coach Ken Whisenhunt, in which Ed Harris won the part. Harris fit the bill for numerous reasons, but mostly because of the identical looks. This week another big name on the Cardinals roster will be casted - Larry Fitzgerald.

I'll have to admit that Fitzgerald wasn't the easiest person to find a double for, but in the end, I was able to find the best possible person to play Fitz in a movie. Casting for Fitz means you have to find somebody with the hair, the athleticism to play the part, and the good personality. I believe the person that I found has all of these qualities and easily runs away with the part.

Find out who it is after the jump... 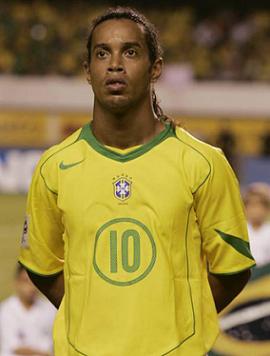 If you're like me, then you had no idea who this guy was until now. Ronaldinho is a soccer player(obviously) for the country of Brazil. He's been regarded as one of the most gifted soccer players today, so you know he'd have the athletic skill to suit up and play the part. He also has the signature hair, flesh tone, and personality to play as Fitz in a feature film.

Obviously I want to leave it up to everyone, so if you have any suggestions for other players, please send me an email at revengeofthebirds@gmail.com.