Some overall thoughts on the Leinart situation

Share All sharing options for: Some overall thoughts on the Leinart situation

Who could have seen this coming? Leading up to the Preseason, Coach Whiz was talking about how happy he was with Leinart's work ethic, his leadership abilities, his performance in the offseason, and how he has earned the right to be the starter. Adrian Wilson was talking about how Leinart has become a better leader and that the team believes in him. Leinart himself took the offensive line to Hawaii with his own money, and he was feeling pretty good about everything. And now he is probably hoping that when he wakes up this all turned out to be one horrible, horrible dream.

This entire situation has been pretty odd to say the least. I was expecting to see Leinart at least get a couple of regular season games to see if he could be the guy, but surprisingly he was benched after two Preseason games after a decent performance against Houston, and one against Tennessee where he failed to get a first down (even though all of the blame isn't on him, the pass blocking was poor, and there were a couple of plays like one where Breaston ran his route a little bit short of the marker on 3rd down and wasn't able to cross it before he was tackled). Then Anderson came in and showed off his inconsistency, where he can make a good throw then miss an easy one on the next play, but he also showed off the Swagtangibles he has that the coaching staff and apparently the players love so much.

Following this, there were reports coming out that the locker room had no faith in Leinart, a ton of trade rumors, Leinart was angry and he felt like he outpreformed Anderson through the first 3 games, you can even look back at how ESPN's Monday Night Countdown crew was bashing him before the game even started, and Cris Carter possibly started all of drama after he said that Larry Fitzgerald didn't trust in Leinart's arm after a pass in the first Preseason game where he was hit by a defender that went in low after a catch and sprained his MCL.

The thing I'm curious about is why something wasn't done sooner. If the coaching staff had no faith in Matt like we are hearing now, why didn't they go for someone like McNabb, Campbell, or Bulger when they became available? Why wasn't it an open competition from the start either? Looking back at everything, the team was making it look like Leinart had the job unless was completely awful in the preseason, and that is what Leianrt probably thought too. He made it clear that he thought his job during Preseason and Training Camp was mostly to work on his timing with all of the receivers. From all of the reports I heard, Leinart was doing fine with that as well, before the Preseason almost every report from Training Camp I saw said that Leinart was the better Quarterback. Then in the Preseason, Leinart just looks okay, he seemed tentative at times and he wasn't throwing downfield, but he also hardly had any time at all to let the deep routes develop most of the time, and looking back at last night you can see how easily the Redskins were getting through our offensive line and getting pressure on Leinart. That has to be a factor in there somewhere. Not everything that went wrong was necessarily his fault, and you could say the same thing with Anderson. Looking back at the Houston game, both of his picks were on plays where the ball went through the receivers hands (although he did rifle them when he should have thrown a softer pass).

And now, it looks like either Leinart is going to be the backup for Anderson, or he will be gone. A weird turn of events after a very weird week. I also think that the entire situation was handled very poorly by the coaching staff, and Leinart. And right now I'm trying to think of what went wrong.

Of course these are all guesses. And like you all have heard from me, I still want Leinart to be the QB, but most of that stems from the fact that I want to see what he can do with a couple of games where they actually gameplan to his strengths, and it would be a shame to just let the former 1st round pick go without a chance to see what he can do this season. There is also the fact that I don't have much faith in Anderson returning to 2007 form after he was slightly outplayed by JaMarcus Russell last season.

When I compare the two of them, Leinart seems like the best chance to win.

I see Matt Leinart as a guy who is like Kyle Orton. Just an average arm, but it can also be an accurate one. And he can do a good job making decisions and not turning the ball over. And even though the two of them don't go deep a lot, they can still throw it deep when they have too. Both of them are capable of putting up big numbers as well, looking at Leinart's 400 yard game against the Vikings in his rookie year, and some of Ortons games last year such as an upset win over the Patriots also apply. But overall, they are both just game managers.

They also have a few pictures of themselves partying floating around on the Internet... 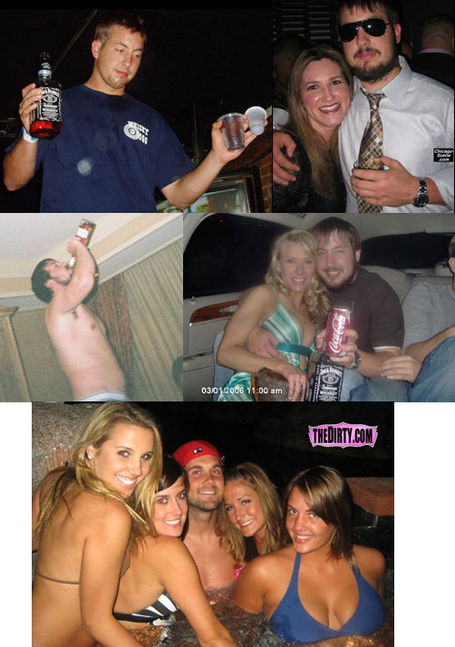 Then I look at Derek Anderson, and I see a taller version of Rex Grossman. They are both maddeningly inconsistent Quarterbacks who could complete a beautiful deep pass or throw a pick into quadruple coverage any time they drop back to pass. Sometimes you just get nervous watching them, and you start thinking "don't get picked, don't get picked, don't get picked....". While Rex has the "Good Rex, Bad Rex" thing where he can be on fire one week and awful the next thing to him, along with some of the (NSFW Warning) best articles ever written on Kissing Suzy Kolber .com, Anderson is a guy who is more inconsistent in one game than anything else. And we have seen it in the Preseason, he made a perfect throw to Stephen Williams in the Titans game, and then right after that he missed Steve Breaston when he was wide open in the endzone, and he threw behind Williams on a play where he was open in the endzone. You just wonder if he can get his accuracy on throws like those two easy ones fixed up. Those are the kind of passes that Warner or Leinart would easily complete.

I'm also worried about is that we will see a bunch of games like this from Anderson. 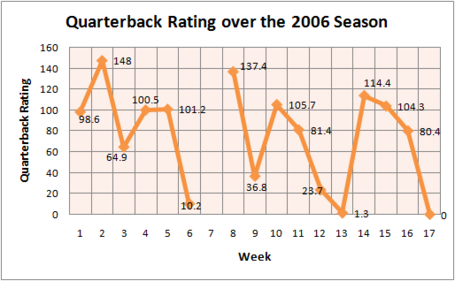 And I don't think I need to tell anyone here where that majestic 10.2 QB rating that Sexy Rexy put up in Week 6 was from...

The difference though is that the Bears had a top 5 defense when the Sex Cannon was doing his thing in 2006, but we don't know if the Defense will be able to make up for turnovers like that if Anderson is still prone to bad decisions like he was last year. And looking at the two of them overall, Leinart is a guy who is safer, but you won't get as many big plays out of him, then Anderson will have more big plays, but there will also be more Picks and bad decisions. The way I look at it, I would rather have a safe game manager than someone who is more of an inconsistent risk taker who can generate big plays.

Now, since it is looking like Anderson will be the QB I will support him even though I am not very optimistic about him returning to 2007 form, but he is the guy now. I wanted Leinart to be the QB, and he won't be unless he stays here and Anderson gets hurt of plays poorly giving Matt a chance to play. And if he leaves, best of luck to him wherever he goes. So, lets just wait and see what happens next.

At this time, I'd say the best thing to do is have Anderson as the starter, keep Leinart as the backup since he has experience and he knows the offense, then have Max Hall as the #3 QB, and try to get John Skelton on the Practice Squad.