Yesterday, I was asked if someone here could insert this awesome photo of Derek Anderson flashing the peace sign that has become part of the Swagtangibles of Derek Anderson meme around here into the picture of Matt Leinart in the hot tub with his ladies. I tried to do that, but I am pretty bad with Photoshop (I actually used MS Paint, because it is all I have) and although it works, I am sure that someone here could do better.

But that gave me an idea, since it is the offseason for the Cardinals there isn't really a lot going on right now. So, I decided to start a little contest to see who can come up with the best photoshopped picture that has Derek Anderson and his little pose featured in it.

Just post whatever you make in the comments section, and the voting will be done by whoever gets the most Rec's on one of their pictures. Have fun.

As for my picture... It is after the jump. 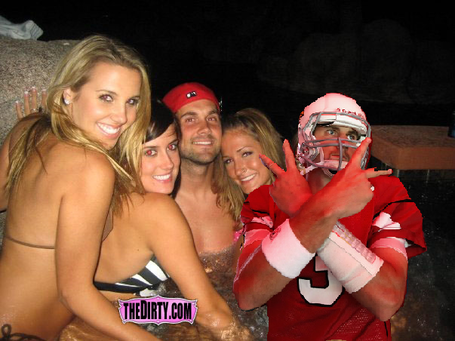 Not great (because of all the jagged edges on DA), but it is what I was asked to do.