Share All sharing options for: Arizona Cardinals Metrics Through 5 Games

First off I would like to apologize having missed getting the past two weeks worth of Metrics up despite going into a BYE week, instead I come baring gifts. After the jump we are going to see how the team has fared cumulatively through five weeks of the 2011 NFL season. Five weeks that promised so much, but have delivered so little so who is pulling their weight and who needs to find themselves grabbing some more pine? Read On 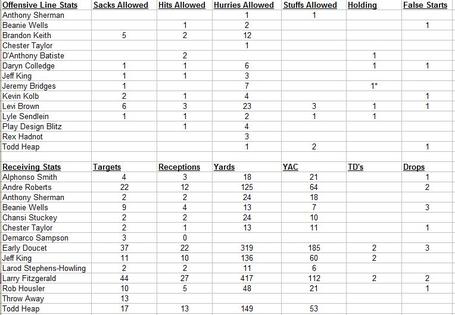 I think the first thing that jumps out at you is just how poor all three of the tackles that have seen significant playing time so far this season has been. Levi Brown has started all season, and has flashed some great moments blocking for the run, but 23 hurries, 3 hits and 6 sacks allowed so far this season, that is unacceptable at this level of the game, he is getting abused on the blindside, on the opposite edge the cumulative total is not much better, 6 sacks, 2 hits and 19 pressures from Brandon Keith and Jeremy Bridges through five games, Bridges was just as bad as Brown in the Vikings game, his only start of the season allowing 7 pressures and a sack as well as a bad penalty to take away a Touchdown.

On the bright side, Rex Hadnot has been tremendous in both facets of the offense, he is helped the Cardinals become a devastating running offense up the middle and has allowed just three pressures in five games.

Boosted by a 15 target game Early Doucet is the second favorite target for Kevin Kolb behind Larry Fitzgerald, his three drops are a worry, but his ability to create yards after the catch is very good and his ability on third downs has led to 13 of his catches and 214 of his yards coming in these situations. Doucet has been thrown at 19 times on third downs, more than any other player bar Andre Roberts and Fitzgerald have in all situations, and more than any other player on third downs (Fitzgerald has just 6 third down targets).

Beanie Wells needs to catch the ball when it is thrown at him, his three drops are equal worst on the team, and he has those on just 9 targets, 33% of the balls thrown his way have been dropped. 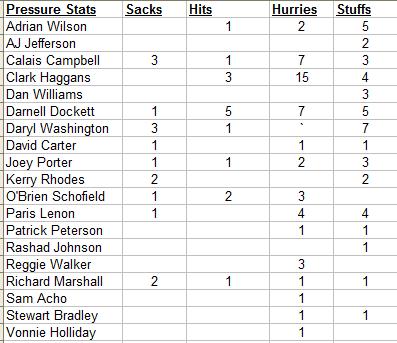 Clark Haggans has to be the biggest surprise of the season so far, he leads the team in combined pressures with 18, and he has played smart football in all aspects of the game. He is a veteran and while he lacks the explosiveness to really be a menace off the edge he is getting it done better than any other Cardinals right now, read into that what you want.

Daryl Washington has been tremendous against the run, he leads the team in runs stopped for a loss or no gain through five games and he has only played in four. Paris Lenon his ILB partner has been a bit of a liability, all four of his "stuffs" have come in one game.

Joey Porter has to grab some pine, he has 4 combined pressures in 5 games. In no world is less than one pressure a game allowable from a guy whose job in the NFL is to create pressure. O'Brien Schofield may not be fully up to date with the playbook, but he has to see more of the field, just let him read run or pass and play off those keys do not worry about coverage other than maybe the odd drop into the flats, the Cardinals need to get pressure on the QB, and Porter is not getting it done.

Calais Campbell may not be showing up big on this stat sheet, but he has been a tremendous player thus far in the season for the Cardinals. He has multiple responsibilities and plays two gaps so his pass rush numbers are never going to be elite, but he is the major reason the Cardinals are a top 10 rushing defense when teams run to the Cardinals defensive right.

Dan Williams is quickly making himself a rocky bed in bustville. His inability to get off single blocks and at times even get driven back on running plays by single blockers is killing the Cardinals right now. If the NT can get taken out of the game by a single blocker the effect resonate throughout the front seven. Right now the Cardinals run defense ranks 29th in the league when teams run up the middle. Williams and to a lessor extent Paris Lenon are the major culprits here. 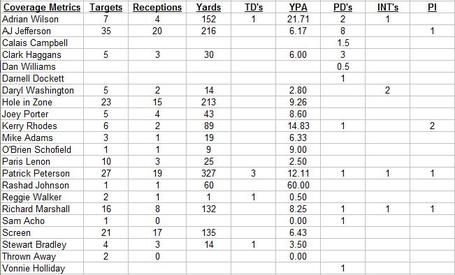 Welcome to the NFL Rookie. Patrick Peterson has had a horror start to his NFL Career. He has allowed 3 TD's in five games, and is allowing over 12 yards every time the ball is thrown in his direction and over 17 yards every time he allows a reception. He is also struggling to make plays on the football, just two of them so far this season, and one was on a Hail Mary heave in Seattle. Peterson needs to step things up if he wants to live up to his billing and draft status, start making some plays young man.

On the opposite side, literally, AJ Jefferson has really impressed with his play through five games. He has allowed a reasonably high percentage of his targets to be caught, but he is a very good tackler and has managed to do really well to keep the play in front of him. He is allowing just 6 yards per target and has been able to get his hands in and among the play with 8 pass deflections so far. If he could just turn a couple of those into INT's the Cardinals defense would be looking on the up and up.

Adrian Wilson is in nightmare land, as long as you play him in the box and don't expose him too much in coverage you are getting a really good player, but once he is in coverage he is a liability that can be exploited. Though over half of the yards he has surrendered came week one as he blew a coverage on Steve Smith he is still allowing over 2 yards a receptions if you remove that.

The entire secondary has had their ups and downs and the lack of consistent pass rush no doubt hurts their performance, but they still need to up their play and most importantly begin to get their hands in amongst the play and create some turnovers, just five interceptions this season of which one was called back on a penalty and one was on a Hail Mary.

Thanks for reading, hope you enjoy it, remember I have included plays negated by penalties if the play was allowed to be completed (Hence the 2 INT's for Washington and 2 TD's for Doucet)

*The penalty on Bridges was not holding, but hands to the face, however it was still a ten yard penalty and I felt it needed to be recorded in these stats somewhere.