In a game that was so disappointing, the was one play that was, in my opinion, one of the best plays of the season for the Arizona Cardinals offense. That was the touchdown that cut the Pittsburgh Steelers lead in the third quarter to 17-14, when Kevin Kolb found LaRod Stephens-Howling in the middle of the field and LSH turned it into a footrace to the endzone.

That play is our Mini Coupe Power Play of the week. Hit the jump for the video and breakdown.

Here is the video of it:

This play was the perfect mix of pass protection, poise, accuracy and speed.

The Steelers only rushed four and the Cardinals had the field spread with no one in the backfield. 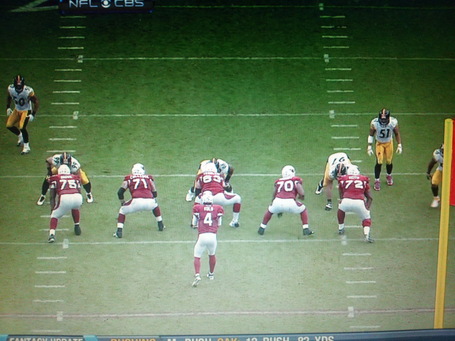 Kolb said that he was looking for Larry Fitzgerald but then saw LaRod. Notice that the offensive line is giving Kolb a pocket. 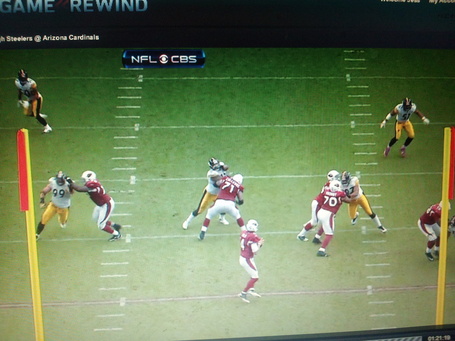 In this next still, Kolb has found Hyphen, who then makes his move to get some separation from James Farrior. It was great recognition by Hyphen to make that move. 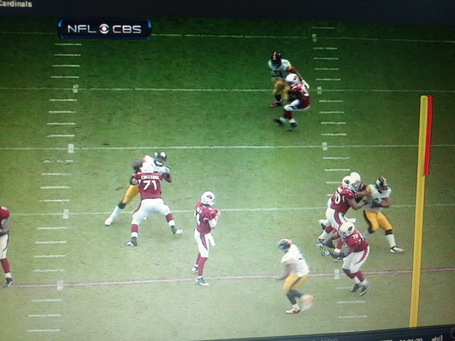 There is a moment in which Kolb almost gets antsy and moves, but Daryn Colledge puts the guy on the ground. Instead of moving around, he steps up and makes a perfect throw that hits LSH in stride, maintaining the space he had and keep him moving away from Farrior. 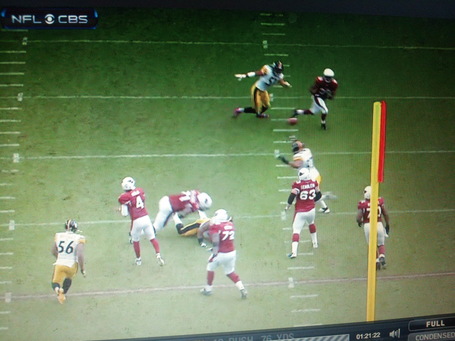 The rest is pretty much speed. As he gets to the outside, Jeff King finishes off the last guy with a key block down the field. No one is catching the Hyphen once he is at full speed. 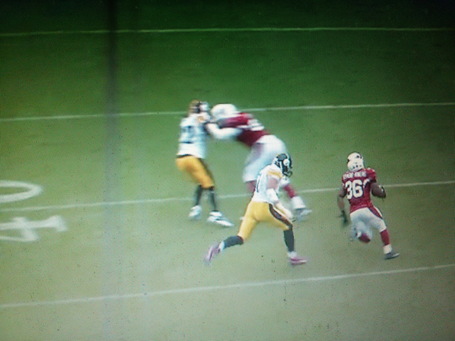 It is this sort of play that gives you just enough hope that things can get better. It also makes you wonder how else the team can use LSH to put him in situations to make plays like this.

On a related note, I need to go back and look at each pass, but it appeared that, watching the game live, Kolb was much better about staying put and stepping up in the pocket instead of trying to get outside and find a broken play. He missed some throws, but the poise was improved.

Now, this was my pick for the power play. On the Cardinals side of things, is there a different play that you would have preferred? When this play went down, what were you thinking? At this point, I thought that a comeback was not only possible, but likely. Those hopes were promptly kicked to the curb as the defense allowed Pittsburgh to answer, I could certainly handle a play of these each day.