Arizona Cardinals tight end Todd Heap is glad to be back in Arizona, where he grew up and went to college, and was surprised when he was released by the Baltimore Ravens, the only team he had known in his ten years in the NFL. However, the guy holds no hard feelings, and has proven that isn't just lip service.

With the Arizona Cardinals headed to play the Baltimore Ravens, Heap bought an ad in the Baltimore Sun newspaper thanking the fans and the organization for all they did and how much it meant to him and his family for the last decade. 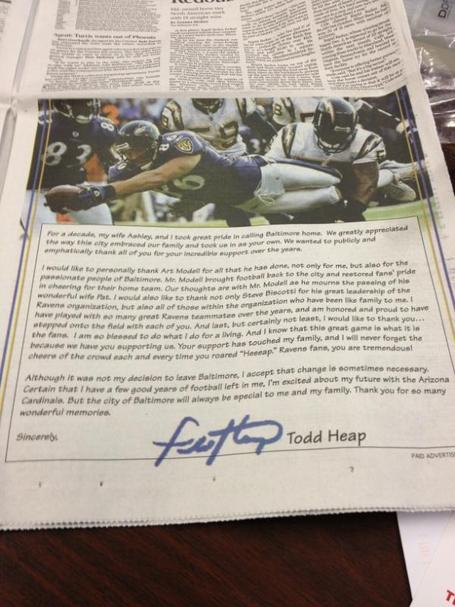 "For a decade, my wife Ashley, and I took great pride in calling Baltimore home. We greatly appreciated the way this city embraced our family and took us as your own. We wanted to publicly and emphatically thank all of you for your incredible support over the years.

"I would like to personally thank Art Modell for all that he has done, not only for me, but also for the passionate people of Baltimore. Mr. Modell brought football back to the city  and restored fans' pride in cheering for their home team. Out thoughts are with Mr. Modell as he mourns the passing of his wonderful wife Pat. I would also like to not only Steve Biscotti for his great leadership of the Ravens organization, but also all of those within the organization who have been like family to me. I have played with so many great Ravens teammates over the years, and am honored and proud to have stepped on the field with you. As last, but certainly not least, I would like to thank you...the fans. I am so blessed to do what I do for a living. And I know that this great game is what it is because we have you supporting us. Your support has touched my family, and I will never forget the cheers of the crowd each and every time you roared "Heeeap." Ravens fans, you are tremendous!

"Although it was not my decision to leave Baltimore, I accept that change is sometimes necessary. Certain that I have a few good years of football left in me, I'm excited about my future withe the Arizona Cardinals. But the city of Baltimore will always be special to me and my family. Thank you for so many wonderful memories."

I am fairly certain that this was written by Heap himself, based on the words he used and the way it was written.

While he has not been able to be on the field as much as we had all hoped, Heap is certainly every bit the man he reputed to be. As of Friday, he is listed as questionable for the game against his only former NFL team, but I would bet that he is going to try and get coach Ken Whisenhunt to get him on the field so he can play for his fans.

There is no question in my mind that this is genuine. We can only hope that one day, because of what he did on the field here for the Cardinals and the adoration the fans had for him, he would be able to do the same thing for us.