The evolution of Darryl Washington continues to impress Arizona Cardinals fans. His ability to stuff the run, harass the Quarterback, bring down a Receiver coming across the middle, and to make interceptions are catching the attention of Offensive game planners, and for good reason. Darryl Washington is playing in only his second year in the NFL, after being drafted with the 47th pick in the second round after MLB Karlos Dansby left in Free Agency to "make a splash" with the Miami Dolphins. It was apparent that with Dansby's departure that there would be prominent hole in the middle of the defense, and how quickly Washington could grow into the role as a starter and equal Dansby's production was a big question markgrew quickly to fill and is on pace to outshine his predecessor. The Week 11 Power Play goes to Darryl Washington for his 4th Quarter Interception in the 49ers end zone. 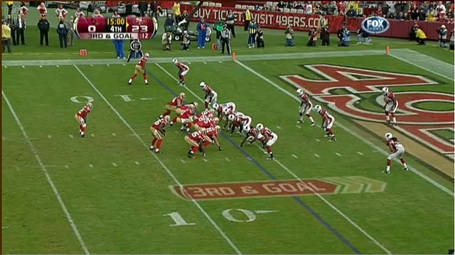 Breakdown of the play

4th Quarter, ball on the six yard line. Arizona has four down lineman, two OLB (Left - Scho and Right - Acho), ILB Washington and Lenon, FS Rashard Jennings outside left hash at the goal line,  SS Wilson 10 yards back in the center of the endzone. Once the ball is snapped the San Francisco TE and FB run right past Darnell Dockett to set up a screen for RB Dixon. But due to the pressure and near sack from Dockett the play is busted, RB Dixon turns to receive but sees Alex Smith is running for his life as Dockett almost pulls him down. Smith spins out of the tackle and runs out to the left. Smith trying to save the busted play makes a toss on the run to WR Michael Crabtree in the back of the endzone, regardless of the tight man coverage by CB Patrick Peterson. During Smiths scramble ILB Daryl Washington watches Smith's eyes and stays parallel to him. As Smith makes the toss into the end zone Washington picks off the pass for Washington's second interception of the year, and only Smith's second INT in the end zone in his career. Washington is all over the field this year and has proven he has the skill set to back up his high draft choice and can rely on more than just his incredible speed to make a play.