On their day off, several players on the Arizona Cardinals spent their time doing some good two days before Thanksgiving. Several players participated in the team function at the annual "Feed the Hungry" dinner. But that was not all. A couple of players in particular, cornerbacks Richard Marshall and A.J. Jefferson, used their afternoon donating food so that needy families can have a Thanksgiving dinner.

Jefferson was at the Basha's on Higley and Elliott in Gilbert Tuesday afternoon handing out turkeys. That was not all. He also donated $1500 (essentially 100 turkeys) to St. Vincent de Paul to help out.

Probably his tweet of the afternoon would be this: "I love making others happy! Especially around the holidays!" 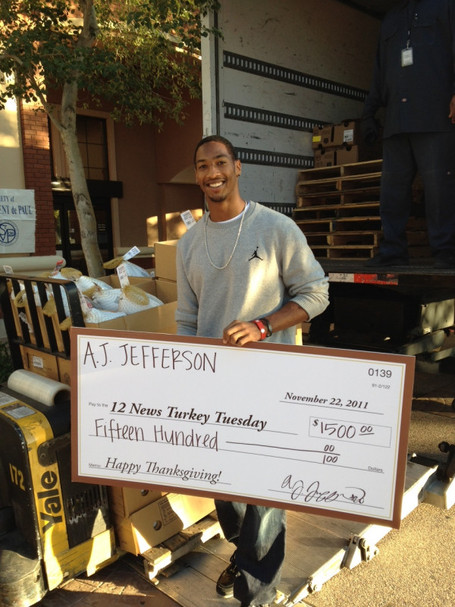 Jefferson's teammate Richard Marshall was at the Fry's on Chandler Blvd. and 40th St. He teamed up with the Chandler Fire Department.

This is the part of the players that we tend to forget. Yes, they make a lot of money. But they take their off day and take time to help out the community. Marshall has young twins. He could be spending time with them. Instead, he is helping those in need.

It is nice to see them doing something important outside the stadium. Although we are here for football, I think most of us realize that it is the stuff that they do after games and practice that matter more.

On behalf of all the fans here at ROTB, we salute A.J., Richard and all the other Cardinals players that took their personal time to help out. Well done!