Fighting for redemption one play at a time. Skelton is known for being able to shake bad performances, even when they happened just one play prior. After a terrible performance in San Francisco back up Quarterback John Skelton was given the opportunity to earn redemption in front of the home crowd in Arizona when he entered the game after starter Kevin Kolb left due to injury. Skelton started out shaky and had many wondering if they would see a repeat performance from the journeyman QB but in a different stadium and different uniforms. The outcome though was completely different, the Cardinals won and Skelton rallied and put together his best game as a passer in regards to completion percentage 67.9 and ended the game with a passer rating of 129.7. Though his two interceptions and one fumble were costly mistakes, with one interceptions taking place just outside of the redzone during a 3rd quarter push while the Cardinals trailed 14-19 to the 49ers.

The play breakdown after the jump! 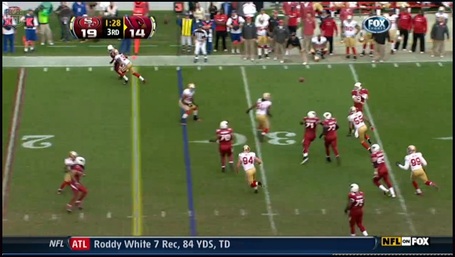 3rd Quarter 1:30, 3-2 on the 27 yard line. Shotgun formation with LaRod Stephens-Howling in the backfield to Skelton's right. Three receivers, Fitzgerald and Roberts to the right, Doucet to the left and TE Todd Heap lined up on the left of Levi Brown. After the snap, the 49ers send a five man rush. LSH runs to the side line as the check down, with Larry Fitzgerald running a curl route at the 23 yard line. Skelton immediately feels pressure when Jeremy Bridges loses his man and it looks like Skelton will be sacked. Skelton spins to his right and out of the sack extending the play and OL Colledge and Bridges continue to try to block. Skelton stares down Fitzgerald while scrambling and throws off of his back foot while on the move. As shown above, the ball is thrown high and Fitz will need to make another circus catch to pull in the ball, but Fitz is hit in the back while the ball hits his hands and the ball is tipped into the air and into the hands of defender Terell Brown for his first interception of the year. Luckily for the Cardinals, Brown is quickly brought down at the Cardinals 18 yard line by a leaping tackle by Andre Roberts.

The play was forced by Skelton and rather than throwing the ball away since he was already scrambling out of the pocket and allowing Feely a manageable 44 yard field goal to pull within 2 points of the 49ers lead, instead Skelton rolled the dice and threw an interception. While he was able to prove his athletic ability by avoiding the sack and making a play with his feet, his three turnovers in a game will result in a loss more times than not. The fact that this particular interception was not enough of a momentum shift in the 49ers favor to put the game away is solely attributed to the Defense and Ray Horton taking the game on their shoulders and stopping the 49ers from scoring for the rest of the game. Skelton is good, but still maturing as a player. The bottom line is that Skelton and Kolb need to learn when to throw the ball away and avoid those costly turnovers.

What is your bone head play from Week 14?