Cardinals Vs. 49ers: A Little Thing That Made A Big Difference

Share All sharing options for: Cardinals Vs. 49ers: A Little Thing That Made A Big Difference

When the Arizona Cardinals beat the San Francisco 49ers 21-19 on Sunday, most people point to the play of Larry Fitzgerald, John Skelton or the defense. They are all very correct. However, there was one play made by a bit player that in the end had a profound impact on the game's outcome. In fact, were it not for this play, the Cards lose.

What is this little play?

It happened at the very end of the first quarter. Ted Ginn, Jr. made his big punt return that gave the Niners a first-and-goal at the four-yard line to start the second quarter.

That return was a sure touchdown. Ginn got past the first wave of coverage and found a ton of open field. He runs towards the sideline and Rashad Johnson can't catch up to him, nor can punter Dave Zastudil make a play. The punter is typically the last chance at keeping the returner from scoring, but this time there was one guy left -- long snapper Mike Leach.

Leach, as you can see here in the photo, didn't give up on the play and got inside the 10 and closed the running lane to the endzone via the sideline. As a result, Ginn has to make a cut to his right and that cut is just enough to allow Johnson, who also did not give up on the play, to catch up with him and make the tackle at the four. 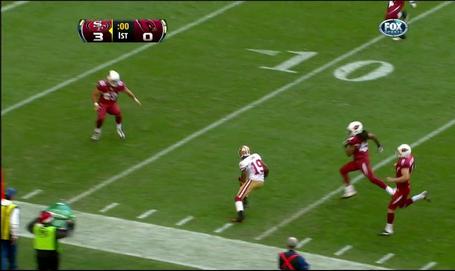 If Leach does not become the last line of defense by getting in the way, Ginn scores. It would have been a 10-0 lead for San Fran, and assuming that everything after that play stays the same, the Cardinals don't win, as the score would have been 23-21.

The play allowed the defense to make that goalline stand that led to only a field goal, which gave the team a little momentum. at the time, had the Niners scored a TD, I was certain that the game would have been over.

It epitomizes the play of the Cardinals during this run. Instead of folding and giving up on the season at 1-6, they kept pursuing and have turned it around. Leach did that. His job was long over. He didn't give up on the play and saved a TD and also, based on what we know happened after that, perhaps even the game.

It just shows that little things like this can and do make big impacts in the games that are played.