Share All sharing options for: Cardinals Vs. Browns Rewind: The Seneca Wallace Fumble

In the Arizona Cardinals' 20-17 overtime victory over the Cleveland Browns, there was one play that turned out to be huge, even though it did not lead to a touchdown because of a terrible redzone drive by the Arizona Cardinals offense. On third down pinned back deep in their own territory, Seneca Wallace dropped back to pass and was sacked for the second play in a row by O'Brien Schofield. The ball came loose and Calais Campbell picked up the ball and ran into the endzone, but the play was ruled dead. Ken Whisenhunt challenged the ruling.

To be honest, I thought it was a dumb challenge. When the call was overturned, I was even more shocked, as was the CBS broadcaster. I thought that Wallace's arm was down before the ball came loose.

Now, the broadcaster made the comment that a player is down if any part of his body touches the ground other than his feet and the palms of his hand.

that would actually be incorrect. Here is what the NFL Rule Book says:

It does not stipulate for any particular part of the hand, which I can then interpret to mean that if the back of the hand that holds the ball touches down first and the ball pops out, it is then a fumble. If the wrist or any part of the arm touch the ground, and it is not.

Even with the replay, it was awful close. But here is a still: 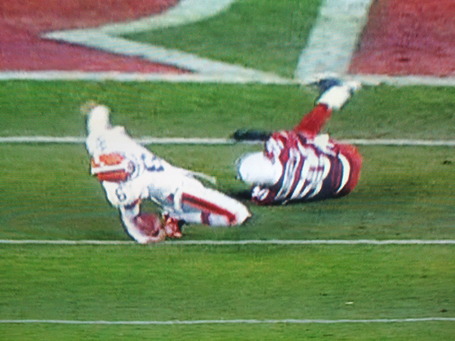 You can tell it is really close, but you will notice that when the wrist hits the ground here, the ball is not secure in his hand. That would be a fumble.

My initial reaction and my thoughts even after the replays had me believing that the Cardinals got a gift. I certainly was not going to complain.

It just turns out that I was wrong and the refs did get it right, as close a call as it was.

The only shame in it all is that the call was not made originally because then the Cardinals get a decisive touchdown, they never have to subject us to that disaster of a -10 yard drive and then overtime is never needed.

Luckily it didn't matter in the end and the Cards got a win.

My question for you is whether or not you really believed before (or even after) the replay that it was in fact a fumble?