We have reached the top five in our countdown to the greatest draft success ever for the Arizona Cardinals. We will reach number one on the day of the draft. Today is a player that was drafted in 1990 and made an impact in the Cardinals playoff appearance after the 1998 season.

Looking back so far on the draft successes, we have covered Johnny Johnson, LaRod Stephens Howling, Steve Breaston, Eric Swann and most recently the combination of Darnell Dockett and Karlos Dansby.

Who is number five? It is Larry Centers.

Larry Centers was drafted in the fifth round of the 1990 NFL Draft as the 115th player selected by the Cardinals. It was the same year that the Cardinals drafted bust running back Anthony Thompson and success running back Johnny Johnson.

He played college ball at Stephen F. Austin and was drafted as a running back/fullback. He did not make much of a contribution to the offense during his first two years, but played on special teams and was a part-time kickoff returner in 1990 and 1991, although he was not any special at it.

Centers played fullback at a time when the position was on the decline, but it he performance at the position increased over the course of the 1990s. 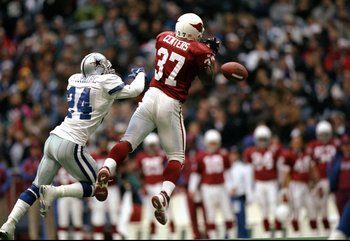 He exploded into the Cardinals best offensive weapon during a very bad period for the Cardinals. His 1995 performance was for the record books. Out of the backfield, he caught a record 101 passes for almost 1000 yards (962). He caught another 99 passes in 1996. In 1996 he also logged his highest rushing total for his career with 425 yards, totaling almost 1200 total yards from scrimmage.

He was finally rewarded with a playoff appearance after the 1998 season in which he caught 69 passes (at that point the team had a real threat at the wide receiver position in Rob Moore). However, after that season, the Cardinals dumped almost all their key players from that year and Centers left to play for the Washington Redskins.

In his career, he is second all-time in receptions by a non-wide receiver with 827, behind only future Hall of Fame tight end Tony Gonzalez.

Centers was a rare player that stuck around a very long time, but when drafted you never ever thought he would be an impact player. His first couple of seasons he looked like a career role player. His explosion in the passing game combined with his being drafted low are the reasons why he has earned his way into the draft success list and in the top five.