Share All sharing options for: Caption This! #6-What's so funny?

Yeah, I know, it's late, but I somehow thought that today was a Monday.  Anyways, another week of Caption This! has come and gone, leaving us with one Champion.  To find out who that is, their caption, this week's picture, and what I mean by the title, hit the jump.

Oh, and AlaskanCard, I have a surprise for you.

Caption This! #5 Champion: AlaskanCard (That's not the surprise)

Caption: Larry: So let me get this straight...you left yout wife, who was 8 months pregnant with twins, for a 21 year old intern?  What were you thinking???

Tiki: Well with my fumbling problems I can’t very well have a baby, let alone two! Besides, 21’s my number man.

"Hmmm, I wonder what hair products Larry uses to get the glean in his hair..."

Congratulations to Alaskancard and Cardzfan!  And now, for the surprise, here is the table I've been promising you (You're welcome.  And I'm looking at you, AlaskanCard):

Remember, if you win, or even receive votes for your caption, you'll get your name on this table.  I think that's some pretty good motivation, am I right?

And finally, here is this week's picture, which explains the title: 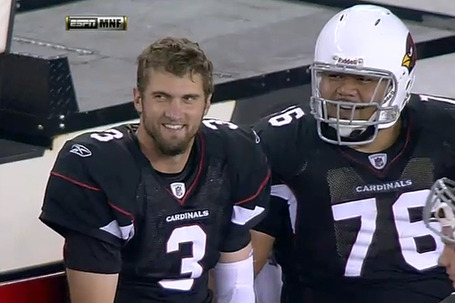