We now have reached the second biggest draft success for the Arizona Cardinals since 1990. Tomorrow you will know who I believe to be the greatest success (you can probably imagine who that is based on who has not been featured). Looking back, we have covered Johnny Johnson, LaRod Stephens Howling, Steve Breaston, Eric Swann, the combination of Darnell Dockett and Karlos Dansby, Larry Centers, Adrian Wilson and Anquan Boldin.

The second biggest draft success that the Cardinals have had since 1990 is cornerback Aeneas Williams.

Williams was selected by the Cardinals with their third round pick in 1991, the 59th selection overall. He played for Southern University, obviously a small school. He played for the Cardinals from 1991-2000. To describe his career, I choose to use the words of SB Nation Arizona writer Scott Howard from his column about the Cardinals' top five draft steals. 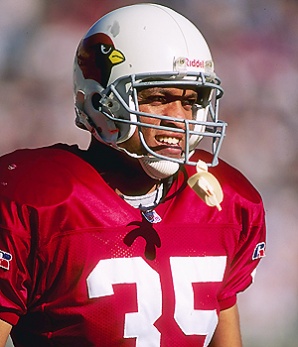 Before Kurt Warner came along this guy was basically Mr. Arizona Cardinal. Williams played 10 full seasons for the Cardinals, appearing in every last game and starting all but one (it happened in his rookie year).

In that time, Aeneas intercepted 46 passes and scored eight total touchdowns - including leading the NFL in picks in 1994. For his trouble, Williams was a six-time Pro Bowler as a Card and twice an All-Pro selection. He was basically a shining beacon in a pile of crap for a number of years. He got the honor of playing on four different four-win teams, a three-win team, and a six-win team. That's why it was so sweet when he basically keyed the Cardinals 1998 playoff victory over Dallas with a pair of interceptions.

Williams took off for St. Louis for the 2001 season and added a couple more Pro Bowls and another All-Pro appearance but he'll always be one of the greatest Cardinals there ever was. He was a Hall of Fame semi-finalist in 2010 and the Hall may eventually be in his grasp.

I think it is a lock that Williams makes the Hall at some point. He was as great a player the Cardinals have ever had. Many of you could say he should be number one. You definitely have a point. But I will argue that there is one other player that I would put above Williams. You will see him featured tomorrow.