We have reached the end of the draft series. We have presented the busts and the successes. Now we conclude with the guy I feel has been the biggest performer in the Cardinals draft history. He was drafted very high, but he has not disappointed. In fact, I don't think a single soul would change that pick in the draft.

The greatest draft success of the Arizona Cardinals is none other than Larry Fitzgerald.

You all are familiar with his accomplishments here. He was drafted by Denny Green and the Arizona Cardinals with the third overall pick in the 2004 NFL Draft. At the time, some questioned drafting a receiver when the team already had a very good one in Anquan Boldin. Fitzgerald, though, was the best player available and the Cardinals grabbed him and have not regretted it since.

He did not have a Boldin type rookie year, catching 58 passes for 780 yards, but from then on, he put up huge numbers. His second year, in 2005, he led the league in receptions with 103.

In his career, he has caught at least 90 passes in all but two seasons, and one of those seasons he missed three games due to injury and finished with 69. He has eclipsed the 1000 yard mark five times and once led the league in yardage.

He has been to the Pro Bowl five times and he has been a First Team All-Pro twice.

Now, why is he ranked ahead of Cardinals great Aeneas Williams?

It came down to a couple of things. One is the almost magical 2008 postseason performance that Fitz had. He set single postseason record for receptions, yards and touchdowns, eclipsing Jerry Rice, the greatest receiver of all time and perhaps the greatest NFL player ever, catching 30 passes for 546 yards and seven touchdowns.

And in the Super Bowl? Who can't forget his catch and run that gave the Cardinals the lead late in the game and seeing the look on his face as he ran to the endzone? It was the look of a man trying to put an entire football team on his shoulder. Williams never took his teams to the Super Bowl. It's not his fault, but Fitz' showing in 2008 was for the ages. He was unstoppable. 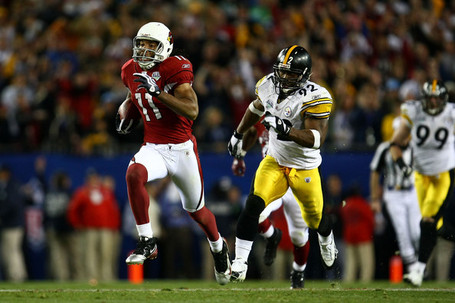 Obviously there is a lot he must do in his career to even come close to that, but has there ever been another Cardinals player that could be even in the discussion of the best player in the entire NFL? Certainly not since 1990, and I would dare say that it probably never has happened.

For this reason, even with as great a career that Aeneas Williams had, we have to consider Larry Fitzgerald the greatest draft success in team history, and certainly since 1990.