Another round of Caption This! is done.  There were several entries, which was great, but like always, one winner came out on top.  Hit the jump to find out who that is, their winning caption, the rules to Caption This!, and this week's picture.

Caption: Larry Fitzgerald and Hines Wars share a laugh after watching Derek Anderson get intercepted while playing catch, with a group of 10 year olds.

And of course, honorable mention:

Caption: A Review of the Superbowl

Fitz: Seriously, Hines..C’mon!! The no calls, the bad calls…you guys don’t seriously think you won??Hines: yeah, we got away with one….LOL !!!!!!

Congratulations to Khodder and, of course, Cardzfan!  Remember, even though they're the Champions for this round, you can still win!  Every week, there's a new round of Caption This!.  If your caption gets the most votes, then you'll be added to the table of winners and their vote counts.  So keep entering, because even though you didn't win one week, doesn't mean you can't win the next.

As for the table I promised you last week, as soon as I figure out how to insert one, I'll update it with that.  But anyways, on to this week's picture: 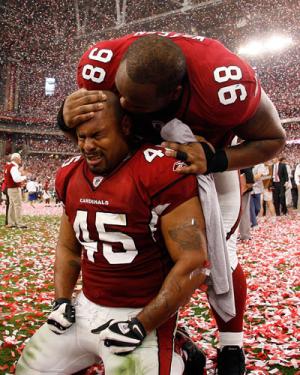