The New York Football Giants will now make their pick in our NFL Mock Draft. They have a list of needs -- running back, offensive line, and in several places on the defensive side of the ball. In which direction do our community and writer GMs take the Giants for this decade? Find out after the jump.

The Tampa Bay Buccaneers are going next, with hevchv and I providing the picks. Email me your picks and explanations by 11PM AZ time tonight. You know the rules -- no trades, no drafting guys that have been drafted.

Remember that what makes this even better is healthy debate. Put in your two cents.

Pouncey will be the future replacement for C Shaun O'Hara, who is going through another offseason surgery and has one year left on his deal. The Giants lack depth across the offensive line but have spent picks and money to acquire tackles William Beatty and Shawn Andrews and have more money tied up in David Dieh and Kareem McKenzie. Chris Snee and Rich Seubert are holdovers at Guard. Pouncey gives the Giants immediate dpeth at C/G and is a solid replacement if O'Hara gets hurt again. Akeem Ayers was a close second since Keith Bulluck is a shell of the beast he used to be. Mark Ingram is also a tempting pick with Ahmad Bradshaw being an unrestricted free-agent. Consensus among "experts" and on Big Blue View is that the Giants will resign Bradshaw and rebuild their o-line before drafting another running back.

My pick for the New York Giants goes to Nate Solder, offensive tackle out of Colorado. Both of the tackles for the Giants (McKenzie and Diehl) are 30+ now and they could use an injection of youth to protect Eli Manning. McKenzie and the right side of the line helped the Giants average 5 yards per carry when the RB ran that way. Diehl is also a solid veteran, so Solder will likely have to wait for some time before he gets a true shot at the starting tackle position. Hopefully when he gets his chance things like this can be prevented. 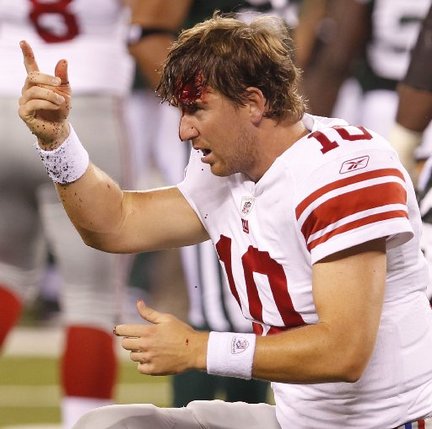 Draft assignments and team needs for Tampa Bay Buccaneers, according to drafttek.com