This past week's Caption This! got a lot of participation.  I guess the DA swagtangibles picture is just really popular.  Anyways, the winner was decided by one vote.  Hit the jump to find out who that is, their winning caption, the rules to Caption This!, and of course, this week's picture.

Caption: DA pysches himself up by counting the interceptions he's going to throw

Caption: DA-Time to put the Winning Curse on the Cardinals by counting the number of games we're going to win this year!

Congratulations to AlaskanCard and DaT3rmin8r!  Now, here is "The Table", all updated for you guys:

(The Table goes in order of weeks won, and then votes received) 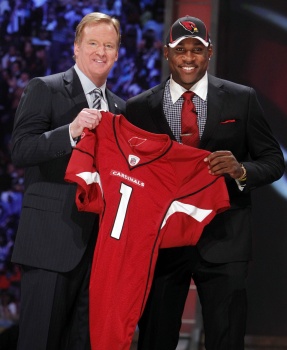