(Note from Jess: While I am on board to acquire Kolb, khodder here has given a counterpoint based on what he was seen and done with crunching numbers. Great discussion has been going on and this definitely deserves a place on the front page.)

Kevin Kolb is currently the hot name among all QB's to end up in Arizona next season. Adam Schefter, John Clayton and Peter King have all come out and said it is a near enough slam dunk that Kevin Kolb is going to be the starting QB of the Arizona Cardinals in 2011. But all we hear about Kolb is that Reid has tutored him, he has been under the guidance of a QB guru, who thought enough of him to draft him in the 2nd round and hand him the starting job over Donovan McNabb. However we rarely see the truth about Kevin Kolb. 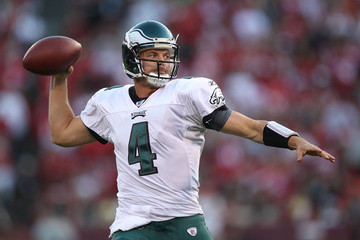 Kevin Kolb is nothing more than an average QB in the NFL right now. If you look at his numbers from the past two seasons and compare the to the league wide numbers in 2010 it does not look pretty at all.

Is this really a guy we want to pay a huge price for? A guy who is outproduced by Alex Smith right across the board. A guy who is beaten in nearly every major statistical category by Kerry Collins, Jon Kitna and Shaun Hill?

And the sad thing is that is not even the worst of it. Arguably the worst part about Kevin Kolb is that in the 38 times he has been hit (18 sacks, 20 rushing attempts) he has fumbled 8 times. 8 fumbles in 9 games, that is horrible. Over the past two seasons Kolb has accounted for 12 TD's (11 passing, 1 rushing) but has also been accountable for 10 interceptions and 8 fumbles, two turnovers a game. Sounds enticing.

So taking a step back and looking at Kolb, we have a guy who is merely average in the NFL, is 27 years of age, has had injury problems, is wildly inconsistent, has turnover issues, does not push his team down the field to scores and has been out performed by the likes of Shaun Hill and Kerry Collins. And we are looking at trading a future first round pick for this guy. Don't make me laugh. Kevin Kolb is likely never going to amount to anything more than barely average, that is the truth, and sometimes the truth hurts.