Will DRC And Patrick Peterson Be A Repeat Of Anquan Boldin And Larry Fitzgerald?

Share All sharing options for: Will DRC And Patrick Peterson Be A Repeat Of Anquan Boldin And Larry Fitzgerald? 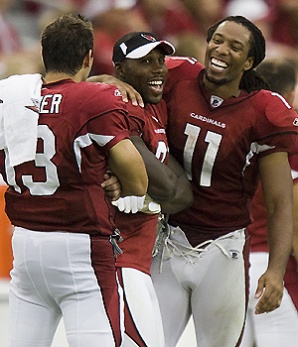 In 2003 the Arizona Cardinals made one of its greatest picks ever in the second when the team selected Anquan Boldin. At the time it seemed like a redundant pick with the Cards selecting Bryant Johnson with their first pick (17th overall) of the draft. But in his rookie year "Q" outshined everyone in the 2003 draft class by an incredible margin having one of the, if not the greatest rookie season a WR has ever had. Q recorded 101 receptions, 1377 yards and 8TD's. The Cardinals had found their wide receiver threat. While Bryant Johnson was wholly unspectacular there was hope he would develop into a great number 2 guy behind Q. He never did and never has and in his 5 seasons with the Cards and his 9 season in the pros he has never had more than 50 receptions or 4 TD's.

Was it a surprise in 2004 when we drafted Larry Fitzgerald with the 3rd pick in the draft? There was no awesome fan forum to truly gauge the reactions of the fans back than but I know for one that I loved the pick (23 TD's in college? Yes, please!). In his first season Fitz delivered a respectable stat line of 58 receptions, 780 yards and a whopping 8TD's. In Larry's second season he had one of his best and completely outshined Anquan. Few expected this to happen and few expected Larry to become even better than Anquan let alone one of the top 3 WR's in the game. In their 7 seasons together, Fitz and Boldin became one of the most feared WR's combo's in the game. When Kurt Warner entered the pictured they became the most feared WR combo.

While the story isn't exactly parallel to Q's and Fitz's, it does come pretty close.

In 2008 with the 16th pick in the draft the Arizona Cardinals picked the small school talent Dominique Rodgers-Cromartie or DRC. Under Denny Green DRC probably would have started immediately like Q and Fitz did but Whiz has a different philosophy and made DRC work to earn his position and seemingly in 2009 that payed off with DRC being elected as a pro bowl reserve.

This year with the 5th pick in the draft the Cardinals picked Patrick Peterson who had even more hype than Fitzgerald coming out of college but a very similar profile; the most "NFL ready" prospect in the draft. While Peterson hasn't stepped onto the field yet and is an unknown quantity as of right now, I believe we can all safely assume that his level of talent and work ethic is going to translate to the NFL.

Is DRC and PP21 our new Q and Fitz tandem? Is Ray Horton the defense's Warner, revitalizing the team and getting them to perform at near elite status? I sure hope so, but with a much happier ending.