The Arizona Cardinal I Would Like To Meet: Larry Fitzgerald

In response to the question that Jess asked us to answer a couple of days ago about who we would like to meet, here is my answer, and it is none other than Larry Fitzgerald. My reason for this answer after the jump.

First off, I would like to say that I have already met a few people who play for the Cardinals. I've met Matt Leinart, Tim Hightower, and Kerry Rhodes while they were signing autographs at Training Camp in Flagstaff last year. I've also met Kurt Warner, Dan Williams, Calais Campbell, Onrea Jones, Ed Gant, and Isaiah Williams at various autograph sessions. And even though I said I want to meet Larry Fitzgerald, I do have his autograph from an autograph signing event he did last summer.

So, I've already met him... kind of. Anyways, at that autograph session at some mall I forget the name of, Larry was supposed to be there from 1:00 PM until 2:30 PM, and I arrived there at 12:30 that weekend thinking that there would not be too many people there if I got there half an hour early but it turned out that there was (by my estimate) over 2000 people in line and some of them were waiting there since sunrise that morning. The line moved incredibly slow, and I found out before I left that a bunch of people spent more time than they were supposed to talking with Fitz and by the time the clock hit 2:30 I wasn't even halfway to the area where Fitz was signing autographs.

At that point, the security people told everyone that Fitz had to go, and the line broke apart. I then went to the window for the store where Fitz was still signing autographs and took a few pictures of him since I assumed that would be the best I could get. Then after about ten of fifteen minutes I realized that he wasn't getting ready to leave and I found out that he was actually going to stay a little while longer and I rushed back into the line along with a few other people. 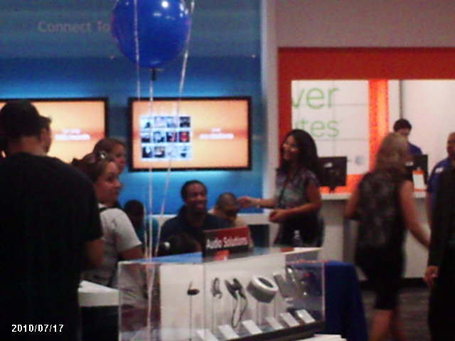 Sometime around 3:00, he was told that he had to go and then everyone who was still waiting outside the door started chanting "Larry, Larry, Larry, Larry" which was enough to get him to walk up to the door where dozens of people were bunched up outside the door and started handing out all of the autographs he had left for a few minutes until he ran out and then he had to go after staying 45 minutes longer than he was supposed to. I got one, but I was also about as far back as he could reach, and I was getting crushed by people trying to force their way through, and at one point a baby carriage was jammed into my knees/back. I tried to get a picture of him when he was up there only a few feet away from me, but unfortunately the battery in my camera died.I also found out after I got one of the autographs and I was on the way out that one of the people who was in front of me in that line was one of the first people to get back in the line once the realized he was going to stay longer, and they got to talk to him and get pictures with him along with getting the autographs, which made me wish I would have gotten back in line sooner.

I didn't get to talk to him, or get a picture with him like many of the other people there did that day, but what he did that day increased my respect for him even more. He stayed longer than he had to even though he was told he had to leave just so he could sign more autographs for all of the grateful fans who spent hours waiting in line for a chance to meet him. It was easy to tell that he cares about his fans. Along with that, he is known for being one of the classiest players in the NFL, he is definitely one of the most talented players in the NFL, and he just seems like a great person who is easy to like for fans of the NFL, or people who don't even care about sports at all.

Right now, I'm just waiting for the next autograph session he does or anything where I can get a chance to meet him and actually talk to him like I didn't get to do last year. 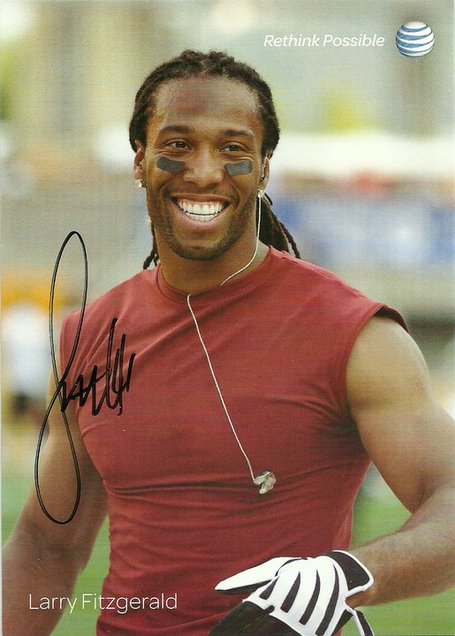