After the weekend layoff and my driving back home from a family vacation, it is time to continue with this series. After pledging my fandom to Anquan Boldin and Kurt Warner, I now declare that number seven on my favorite list is former Cardinals safety Tim McDonald.

On the least favorite side, we go from Jay Schroeder to Thomas Jones, then to Jim McMahon. Today is Seth Joyner. 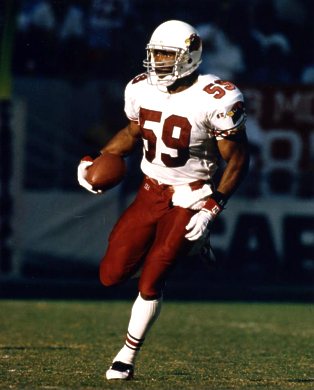 Joyner was not that bad a player here, but he represented Buddy Ryan. Ryan was a disaster of a coach and he lured former Eagles players (like McMahon and Joyner) to the team. Joyner was past his prime when he came here, but earned a Pro Bowl berth in 1994, the first season with Arizona.

I resented him because of the years with the Eagles. I hated that team and their defense. Those were the days when Arizona was in the NFC East. Joyner came and did not perform to the level of before. His tackles went from 113 in 1993 to 53 in 1994, but he did get six sacks. He wasn't a complete loser, but he was not who he was in Philly. It just bothered me that he was party of the "Eagles" group that started up after Buddy boy Ryan (aka, a winner in town) showed up.

Tim McDonald is another story. I remember how incredible a player he was. his 1989 season was sick. He had seven interceptions and 155 tackles!. The issue, of course, was that the team's strong safety had over 150 tackles. Obviously the front seven was not taking down ball carriers. 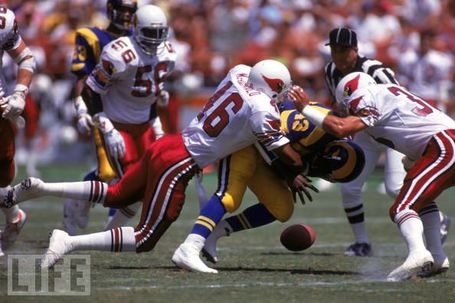 As a fan, who only heard games on the radio, his name was always called. You had to like him. Sadly, he left to the 49ers after 1992. But this was in the time before SF was a hated rival. They were in a division across the country. I paid attention to him after he left. I was not upset at him, but I was disappointed the team did not bring him back. I don't know if there will ever be another player like him. He could tackle and could cover and made big plays. He was my favorite player at the time (89-92).

Tomorrow's choices will be another washed up defensive player and the favorite is another Buddy Ryan screwup.