Ricky Proehl is one of my favorites. He was a white guy with great hands and "deceptive speed" (which, I have learned over the years, means that he runs well but because he's white it surprises you). He led the team in receiving in 1990 and set the team's rookie record for receptions (since obliterated by Anquan Boldin). Obviously it was not a great year when the leading receiver has 56 catches. 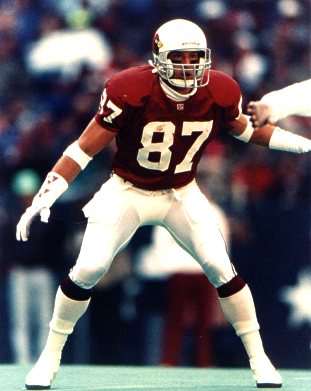 He was solid and seemed to make big catches (at least I remember it that way). I was unhappy when Buddy Ryan let him go after the 1994 season. He managed to play another 12 seasons after that and was a part of the Rams' Super Bowl teams. I couldn't believe it when I saw him in those games. I was thrilled and somewhat satisfied that long after Buddy Ryan was out of the league Proehl was still playing.

As for Dexter Manley, he was a stud...long before he played in Arizona. He was the first of a long line of "has-beens" that graced the field for the Cardinals. He was brought in by Joe Bugel who knew him well in Washington, where he logged 91 sacks in nine seasons.

But when he made it to Arizona, he had been suspended thrice for failed drug tests and ended doing nothing in four games for the Cards. As a young teen, I did not like the fact that the team was employing a drug addict and a guy who couldn't read. He managed to go to college for four years but couldn't read or write. It just bothered me.

I know that people believe in second (and third and fourth) chances and the illiteracy made a good story, but I didn't like it and it ended up being a trend of bringing former stars that were fading. It was a pattern that was repeated too many times.