In this most recent series, we have reached the top five on the good list and on the more dubious one. These are more recent players, both being defensive backs.

Adrian Wilson makes the list of favorite players, while failed free agent signee Duane Starks is the one I dislike more than almost any other of the payers I have disliked on the Cardinals

Wilson is, plain and simple, a stud. He leads by example and gets in the face of teammates. He also is a willing teacher (see this offseason with Sam Acho). He pulls no punches when it comes to describing what went wrong, especially if he has disappointed us or himself.

With his torn hip abductor, he flat out said it did not affect him. He also recognizes his play from last year and vows to be better -- not to prove anyone wrong, but to play at a level that will not disappoint the fans, his teammates, his coaches or himself.

He is a big hitter, and while some of his hits have been questionable, it is what I love about him. Since joining Twitter, we see he is also a bit of a funny guy (see the tweet about his face and boxing/MMA). As tough as it was last year to watch him in coverage, he is a guy I love to watch and root for game in and game out. If he were ever to leave Arizona, I would continue to follow him and root for his personal football success.

On the other side, we have Duane Starks. He signed a big free agent contract before the 2002 season, after playing four years on the dominating Baltimore Ravens defense, having intercepted 20 passes and won a Super Bowl ring. 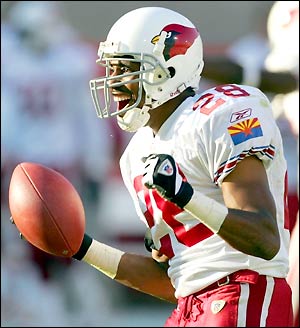 He was supposed to be that big time shutdown corner. Between injury and ineffectiveness, he was a disappointment. I can't remember for sure, but I have for some reason the memory that he was a talker and talked a good game. I could be wrong, as almost all good cornerbacks. Since he never performed at the level he claimed he would, I found it very upsetting as a fan.

I hated every play he gave up. I was so happy to see him go. I was even happier to learn that it was not an issue with the Cardinals. He went next to the Patriots and was found to be terrible there, too.

I guess for me it comes down to expectations. Starks had raised expectations, he did not live up to them, did not have any real fan appeal and and disappeared. That is why he is on this dubious personal list.

Tomorrow's players feature a current fan favorite and also a player who was very, very good, but a big butt.