As promised, I am going to share my rankings from 10 to one of my favorite and least favorite Arizona Cardinals players. You saw who the players were -- now is where you see my actual rankings and why.

The first of such players -- the ones I liked the least as Cardinals -- is quarterback Jay Schroeder.

I'll be honest. I'm not exactly sure why I don't like him. I would say that it is because of his connection with the the L.A. Raiders, but I liked Steve Beuerlein, who was his teammate there and on the Cards. 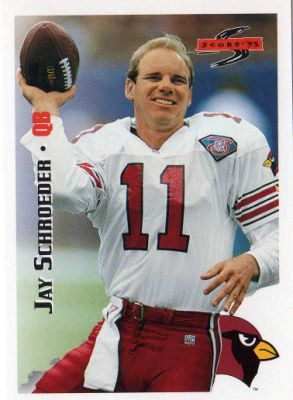 Perhaps it was just that he was one in a long line of retreads at quarterback -- Jim McMahon was before him and Dave Krieg followed him.

Maybe it was because on Tecmo Super Bowl for NES (a games I still have to this day) he was wildly inconsistent with his throws, even to a wide open Willie Gault.

In this case, there is no logical reason for my dislike, but I just did not like him as a player and especially a starter for the Cardinals in those terrible days.