Wednesday I revealed that Anquan Boldin, a player so many players hold cherished memories as an Arizona Cardinal, was my 10th favorite player on the Cardinals in my life. Most would say that this is reasonable, but perhaps should be higher on the list. He isn't for a few reasons, but favorites are not always rational.

In fact, my number nine is in that category. The next guy up on the list for me is former Cardinals quarterback Tom Tupa. 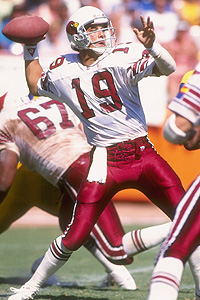 know. Tupa was a terrible quarterback. He probably is right up there in the worst two or three players to ever start at the position for the Cardinals. However, I liked him. I wanted him to do well. No, as Strohman wondered, I do not know the guy, but I got attached to him. Maybe it was the reports of being called "Chachi" for his likeness to the Happy Days character or for his voice that sometimes cracked when at the line of scrimmage.

I do know that it does have to do with the fact that he could punt. I found it very novel that a quarterback could punt. I recall when the Cardinals' regular punter (and one of the league's best) Rich Camarillo got hurt and Tupa was his replacement. I remember some booming kicks from his foot.

After he left the Cardinals, I didn't pay a lot of attention to him, but was surprised when years later he was a full-time punter. It just made me laugh to think that a guy to transform his career like that and go from QB to punter.

Pop quiz: do you know who scored the first two-point conversion since it was re-allowed in the NFL? That would be Tupa, who did so for the Cleveland Browns. He had two more conversion scores that year. He even made the Pro Bowl as a punter on more than one occasion. Fascinating!

Call me crazy, but to this day I am a Tom Tupa fan. Too bad he was so useless as QB here.