Share All sharing options for: More Proof That Larry Fitzgerald Is Just Awesome

Just last week, Larry Fitzgerald amazed us with a one-handed Willie Mays-style catch he made against the Oakland Raiders. As fans of the Arizona Cardinals, we have grown accustomed to these types of catches. But Friday night in the first quarter of the preseason game against the Green Bay Packers, he seemingly one-upped himself.

The catch was more difficult that the one he hauled in in Oakland. He had to dive to his right and extend himself parallel to the ground just to be in position to maybe get his hands on the ball. 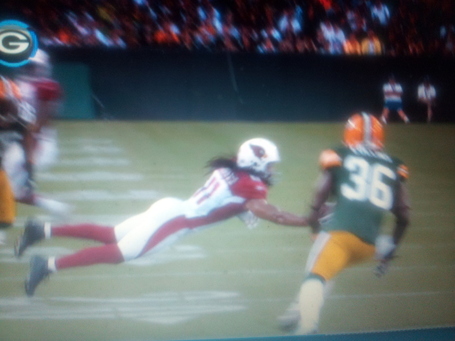 Notice that the left hand is under him. He fully extended his right arm and was able to scoop and cradle the ball while in midair. Then he had the presence of mind to cradle it and get his arm under it so it didn't ever touch the ground. 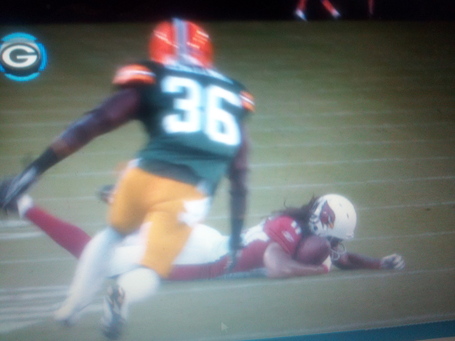 Fitz mis making these kinds of catches daily -- practices, games, probably in the cafeteria.less than a minute ago via TweetDeck

Hello, Cardinals? Eugene Parker here. Price for my client, Larry, keeps going up.less than a minute ago via TweetDeck

Here is one from Scott Howard over at SB Nation Arizona.

@LarryFitzgerald pretty sure you going to have a no hands catch by the end of your career... #telekinesisless than a minute ago via Echofon

At this point, I would not be surprised. He'll figure out some way to do it without his hands.