Share All sharing options for: Arizona Cardinals/San Diego Chargers Rewind: The Making Of A TD Run

There were three really spectacular plays in the preseason game between the Arizona Cardinals and the San Diego Chargers. There was the Kevin Kolb to Larry Fitzgerald 80-yard touchdown play. There was also the Patrick Peterson pick six. The other was the reverse play in which Andre Roberts ran 34 yards for a touchdown.

After the jump, let's take a look at how the play developed and why it was so successful a play.

First off, take a look at the video:

The play is just exciting to watch, but I took some screen shots to illustrate how it all went down.

Notice the formation below of before the snap. It is the two wide, two tight formation out of which the Cardinals have run the ball a lot. Beanie ran really well with two tight ends in the game. 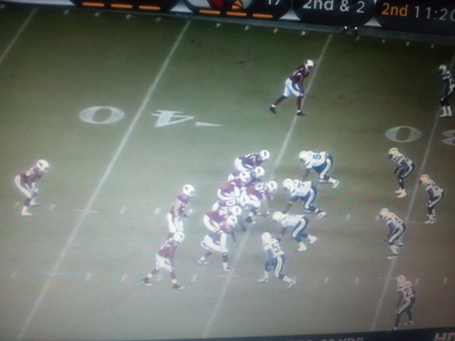 Now, as the play develops, before the pitch from Beanie to Roberts, notice in the bottom right there is a corner waiting to make a play on Wells after he hits the outside. He probably should have noticed Roberts not blocking him and alerted his teammates for the reverse. Any other run play would have Roberts out there engaging the corner.

The two key blocks that make this work from the start are Jeff King (blocking number 53) and Daryn Colledge engaging his defender just above King. This gives Roberts the space to get to the other side of the field. Also notice Todd Heap and Jeremy Bridges are at about the 32 right then. 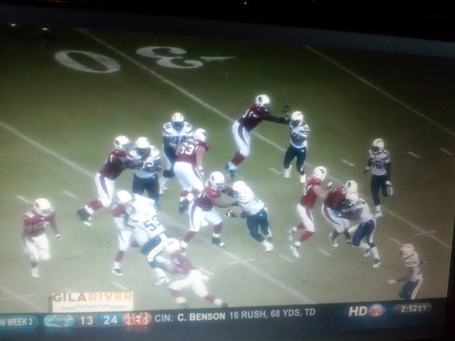 Once he gets past the line to the far side of the field, look at Levi Brown in the bottom right of the pic. His defender ends up on the ground, who then makes number 66 change routes. Brown just tossed the guy to the ground. 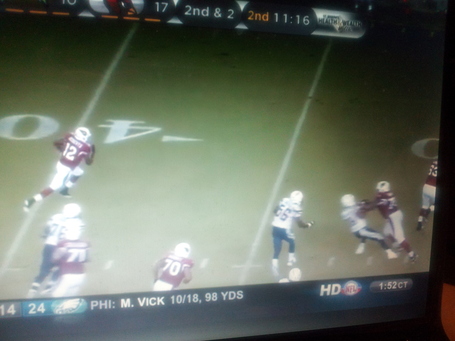 Here it is again, but focused on the pancake. 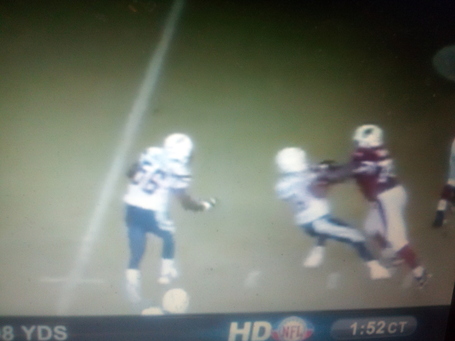 After getting into the positive yardage area, you will now see Larry Fitzgerald throwing a block keeping the running lane clear and Kevin Kolb running up ahead with Lyle Sendlein. 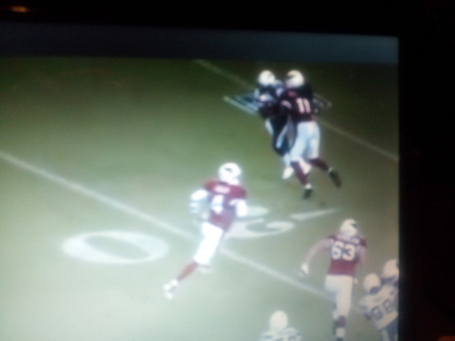 Kolb's next move was to block who I believe is Eric Weddle. That is something they could not do with Warner because he looked like he was made of paper. No matter how much you want to say that you don't want your quarterback doing that, I get fired up. Quarterbacks that block for their teammates are studs. 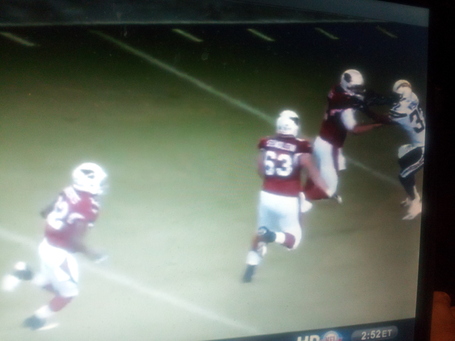 The last bit of teamwork is here at the goalline. It is Heap and Bridges, who moments before were at the 32-yard line at the start of the play. They went down the field and Heap makes the play a touchdown play by keeping Bob Sanders out of the play. 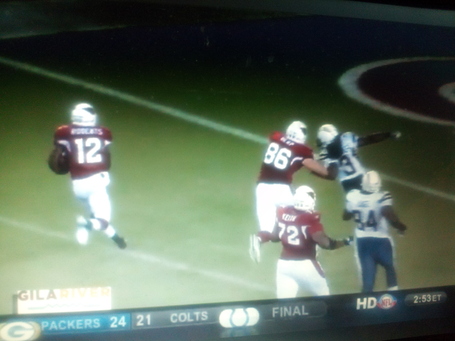 There you have it. The anatomy of a trick play that goes for a touchdown. It worked in the game. Darren Urban noted that it did not look that pretty in practice.