One of the concerns that our community has had for a long time has been Levi Brown. As noted in the game thread highlights, he has become the new primary target of frustration from the fans. He gave up two first quarter sacks in the game the Arizona Cardinals played against the Carolina Panthers and was much more solid the rest of the way.

Ken Whisenhunt spoke about Levi Brown's early play and mentioned specifically how he has "got to be better about trusting his technique." He also explained the sack Levi allowed to Charles Johnson in detail.

I haven't gone back to watch the whole game, but Whisenhunt seems to say that where Levi struggles is with the beginnings of games. Here's the whole quote:

"Levi's got to be better about trusting his technique. The one time he gave up pressure he overset the guy. When you talk about being smart and understanding technique, on that play it was a quick throw, if the guy beats him outside he's not going to be a factor in the play. But Levi was trying to make sure he got a good punch and he sat out and the defender came up and under and it gave him a clear lane. That's just something you've got to be smarter about. That's where Levi's got to get better early in the game."

Here's what Whisenhunt meant on the sack.

On this first still, you can see the rest of the line is trying to keep tight inside but Levi was waiting and there is a big inside gap. Note what Whiz said -- "if the guy beats him outside he's not going to be a factor in the play." 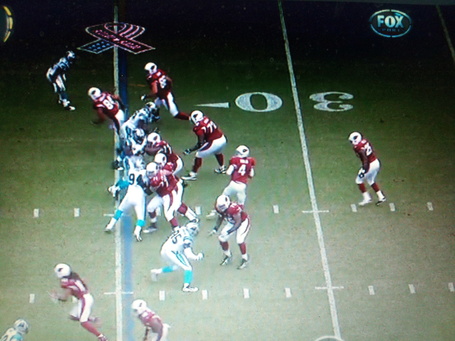 Here is where you can see how Johnson easily slipped inside. 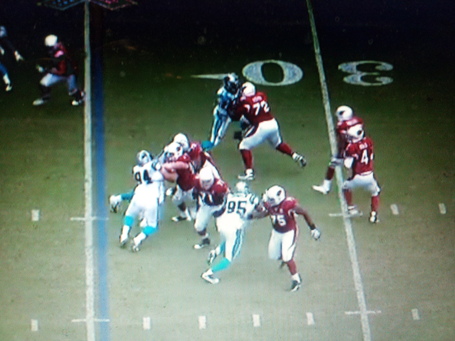 Levi basically tried too hard to do more than he needed to.

The result was Brown and Daryn Colledge blocking each other and Johnson with a free shot at Kevin Kolb. 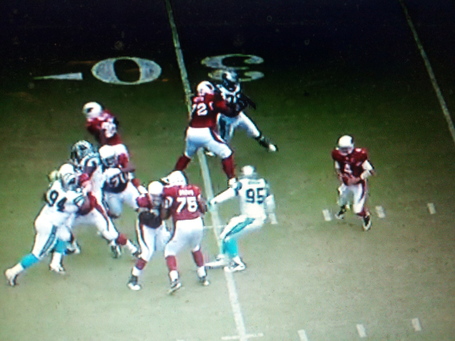 I'm going to go back and look at all the passing downs to see what Levi did right and wrong. But I don't recall hearing his name get called again in the second half. That will be a forthcoming post.

For now, know that Levi apparently doesn't get into a rhythm early in the game.

That really has to stop.