Share All sharing options for: Looking To Earn More Money In A Bad Economy? Try Selling Your Cardinals Tickets

If there is one non-football thing that we have heard a lot of over the last several years is putting things in the context of "in this economy." The truth is that for many of us, maybe even most of us, the economy has taken its toll. However, in a time where stocks and real estate have struggled, there appears to be one sure-fire money maker. That would be NFL ticket resales.

According to a report on Forbes.com, selling your tickets to NFL games will earn you, on average, a 98 percent gain.

If you have Chicago Bears or New Orleans Saints tickets and sell them, you will make the most money. Their resale values more than triple.

How about the Arizona Cardinals?

In terms of net yield, they rank in the bottom third, but that is still quite profitable. On average, it is a 57 percent gain.

What does this mean? It could be a couple of things.

Honestly it is hard as a big fan to think of tickets as a business, especially if it is your favorite team, but you could look at this as a money maker. If you look, even the Jacksonville Jaguars tickets more than double their money.

You could try a side investment by snagging season tix for another team and reselling them. You could do the same for the Cards as well.

That, of course, has a different set of rules. If you sell your Cardinals tickets, by fan code, you must sell your tickets to a Cardinals fan. We've historically had enough of other fan bases hijacking home games from the team.

Looking to buy tickets? That takes a little more work to get value. If you want cheap, you can find seats at University of Phoenix Stadium under $10 for some games. The tickets tab here on the site shows you some good deals.

After reading this, it has me seriously considering using outside markets as a means of making money. Who knows? Maybe.

But if there is anything to be learned, even in weak economic times, we all are still crazy about football. I'm not sure if I should be thrilled about that or not. 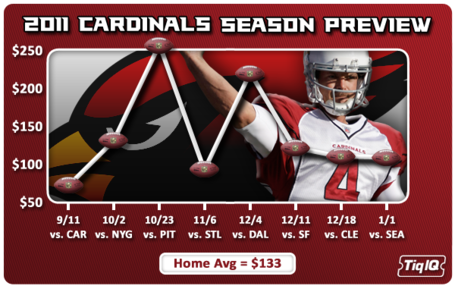