Week two offensive metrics are here, it was a game that looked ugly for most of the game outside of the third quarter and one or two other plays the Cardinals offense really struggled. This week I have added a couple of new items to what I will be recording. These include;

Play design Blitz - Basically when the defense has drawn up a play that has allowed a free rusher to come unblocked to create pressure. The Back has picked up the right guy or there was no back in, the OL is all picking up their assignments, just good defensive calls and plays. I saw this a few times on Sunday.

Kevin Kolb - If Kolb is the reason he is under pressure, taking a hit or being sacked he will get the blame. Holding onto the ball, rolling into pressure et al, Kolb is going to get the blame. It is a little bit subjective on the timing, but I will try to keep it consistent.

Thrown Away - If Kolb throws the ball away, not really targeting anyone, but it is still a pass attempt. I am trying to capture all the pass attempts here so I have added this.

If I get the chance to go back to week 1 and look through to see if any of the plays fall into these categories and update the cumulative totals for my quarterly updates. 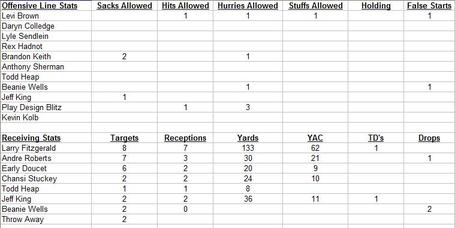