A while ago, I asked fro nominations for the boldest Arizona Cardinals fans. I didn't get many nominations, but one user self-nominated. However, it was a comment on a different article that caught my attention.

So without further adieu, hit the jump to see whom I have chosen as the "boldest" Cardinals fan.

A first look of this fan is this: 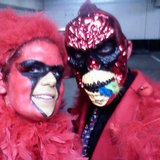 Personally, the outfit kind of creeps me out. However, the bold part is the fact that this fan lives in Seattle, not Arizona. This fan is redforlife.

Here is what sold it for me. It was comment on buying tickets:

Selling to fans of the same team...

Is like knowing you are talking to a woman on the internet. I buy my Cards vs Seahawks tics on craigslist every year from posters saying Seahawks fans only. Even bought a Seahawks hat to wear when I meet up with them. Devious, I know, but I get good seats and get to represent card nation. Go Cards!

I gotta say that the Seahawks cap to get tickets to see the Cards is priceless.

It would be hard to top that as a fan.

Thank you, redforlife, for sharing this and for being such a bold fan of the Arizona Cardinals, even while in the Pacific Northwest in enemy territory.