Cardinals/Seahawks Rewind: Was TD Throw A Good Play By Kolb?

Share All sharing options for: Cardinals/Seahawks Rewind: Was TD Throw A Good Play By Kolb?

One of the only highlights of the Sunday matchup between the Arizona Cardinals and the Seattle Seahawks was the touchdown pass on the second quarter from Kevin Kolb to Larry Fitzgerald. It gave the Cardinals the lead and it also gave Fitz the Cardinals' all-time record for touchdown receptions.

However, in the moment, many people felt that the throw was ill-advised and perhaps should have been an interception that turned into a lucky play.

Let's take a look and decide.

When Kolb first drops back to pass, he did have a place to throw right away, had he wanted to make an immediate throw. If you notice, Todd Heap had some space to start with. However, he could see the linebacker start rushing. It is apparent that Fitz was his number one read. If he sees Heap first, he could make a throw that gets a first down and maybe even a touchdown. 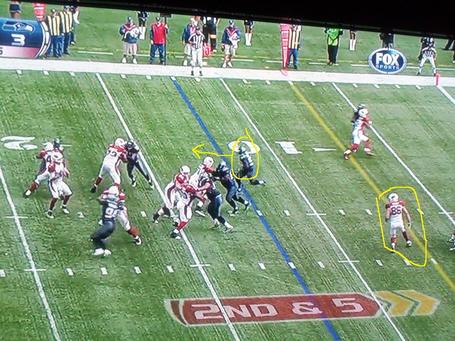 The blitzing linebacker happened to be in the throwing lane that Kolb would have had. In the next still, you see that he very likely could have batted the pass down if he tries to hit Heap. You can see the vision going to the middle of the field. At that point, the defensive back has recovered and Heap would not be open. 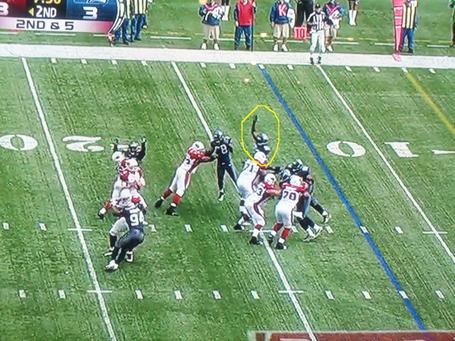 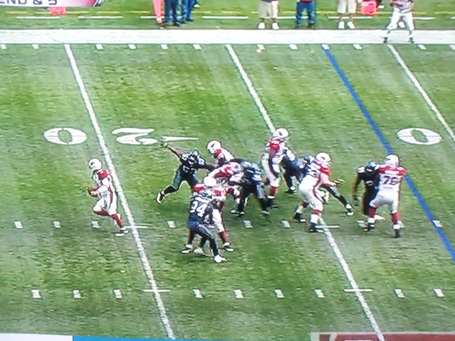 At this point, Larry Fitzgerald has reached the goalline in his route, looks back and sees the play breaking down and changes his route, heading to the corner of the end zone. 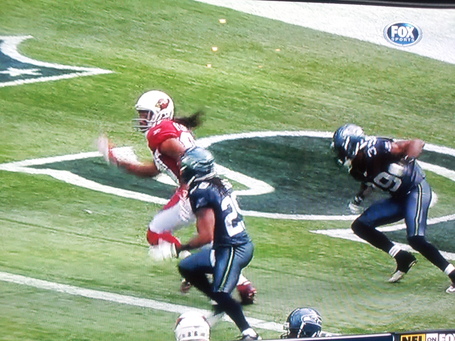 When Kolb turns back around he can see Fitz and in a still I didn't get, Fitz signals for the ball. It is them after the signal that Kolb throws the ball. Because of the defender in front of him, he wasn't able to step into his throw completely. Because he knows he has a good arm, he still makes the back foot throw. I synced the times on the two camera angles that the TV showed -- the play and Fitz' route. Kolb does not make the throw until Fitz gets that little space after he cuts away from the defenders and signals he is open as he headed to the sideline/corner of end zone. It was not  a ball he was trying to throw away. 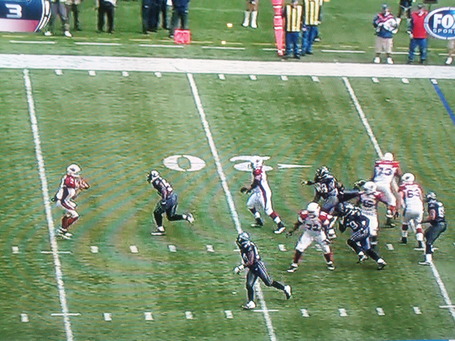 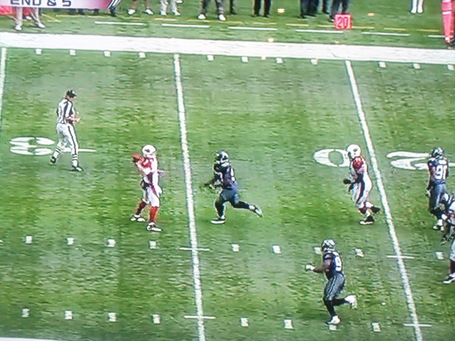 You can see here from Fitz' perspective that he sees that the ball is a little underthrown (because he could not step into the throw) and comes back to the ball. See the area behind him, that was where Kolb was trying to get the ball to. Because of the separation Fitzgerald got for just a split second, had Kolb put the ball a little past him, the play is an easy touchdown. 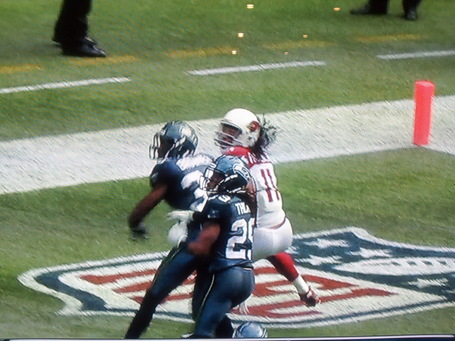 In this case, Fitz stops, readjusts and leaps up. Look at where the ball is. The defenders could not have made a play on the ball. It was beyond the reach of both defensive backs, so there would have been no interception. Result -- touchdown. 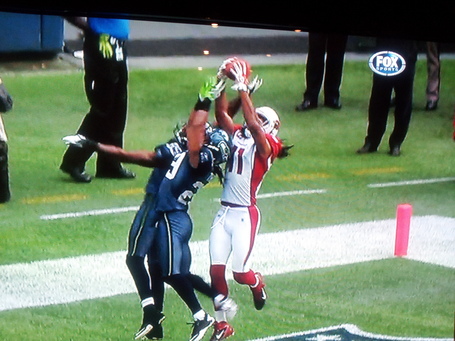 Kolb had the possibility of hitting Heap early, but it was probably not his first read, so he probably saw it too late when the coverage had come back to him or he felt the blitzing linebacker would get his hand up. Kolb's throw was slightly underthrown because of the pressure that kept him from stepping into the pass, but it was not a bad play. He did not force the ball into double coverage. He threw the ball to Fitz when he had space and was open. The ball, while underthrown, was out of the reach of the defenders who had come back to Fitz. Fitz made a great catch in traffic, but it was not even close to the most difficult catch he has made in traffic.

The only thing he did not execute right was putting the ball just beyond Fitz. Had he done that, it would have been praised as a perfectly thrown ball after making an adjustment on the play.

The other question one could pose is about bailing the pocket. In this case, it was the right thing to do as there was an unblocked blitzer coming through a gap. If he steps up, there is nowhere to throw the ball to. Rolling back and away from the pressure bought time and created the separation that Fitzgerald got.

In the end -- it was a very good play, one that you see other very good quarterbacks make without criticism. He has not been perfect, but that play was not a mistake, an error in judgement or just plain lucky. It was a play caused by Kolb and Fitzgerald.