Larry Fitzgerald fined for facemask, but was a smart football play

The guy that doesn't do anything wrong gets fined for doing something wrong, even though it was the right thing.

Share All sharing options for: Larry Fitzgerald fined for facemask, but was a smart football play

Larry Fitzgerald is a god.

Ok, that is a bit of hyperbole. He is really good, though. However, he is not infallible. He was penalized for holding on a 70-yard pass play to Andre Roberts earlier this season.

Now he has been fined by the league, according to azcardinals.com writer Darren Urban.

It was not the result of a penalty, but he should have been penalized for it.

Right before the end of the first half of the game against the Rams, Kevin Kolb attempted a pass to Fitz, but cornerback Janoris Jenkins jumped the route. It should have been a pick six, but Fitz broke up the play. He did so by grabbing Jenkins' facemask and pulling him down. There was no flag on the play and the ball fell incomplete.

The play cost him $7875, which, of course, is pocket change to the man who signed a $120 million contract at the start of last season.

In case you disbelieve it, here is proof: 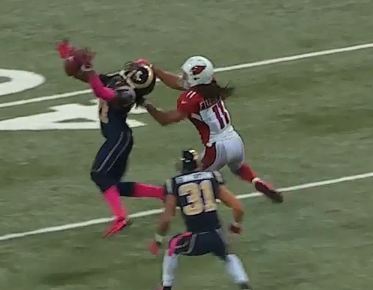 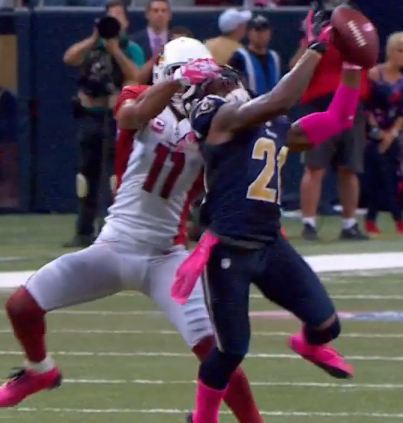 As bad as that looks, it was a big team play. If he doesn't, Jenkins scores a touchdown and it ids 17-3 before the half.

As always, Fitz puts the team first, even if it costs him a few thousand dollars.

Is there anyone less selfish in the league?