Looking at it again, it looks like it would have been the Dallas game all over again.

In overtime last Sunday, the Arizona Cardinals ended up losing to the Buffalo Bills after John Skelton was intercepted by Jarius Byrd and Rian Lindell kicked the game-winning field goal. However, just one play before, there was a play left on the field when LaRod Stephens-Howling dropped a screen pass that had potential for a big play.

I was on the field at that point so I didn't see the play from the press box, but from the big screen it made me think of the Dallas game last year when LaRod had a similar play that was a touchdown to end the game. So I went to the coaches film to see just how big a play it would have been.

It looked like it would have won the game.

Now, the throw by Skelton was not great by any means. It was a little behind LSH and a little low. However, it was very catchable. See the screen shot below. It hits him in the hands. Not easy, but definitely catchable, and one that he has made many times before. 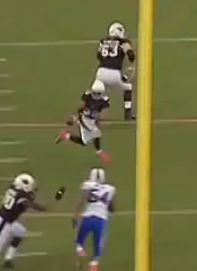 I get the impression that he knew the space he had was a little overanxious to start the play. Just how much space? Look below.

That image is when the ball hits him. You'll see that at the bottom middle of the image, there is a Bills player engaged with what looks like Rob Housler and then beyond that there is only a safety. As soon as LSH makes the turn (as his drops the ball), Lyle Sendlein is there to clean up Housler's guy and then there is an open lane with only the safety to beat still. 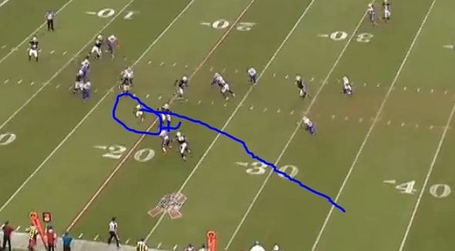 Considering LSH's speed and elusiveness in the open field, in my opinion he gets past him, which means all that is left in front of him is grass and the end zone. The game is over and the Cardinals win 22-16. If you go conservative at least, the worst that happens (assuming a catch and no fumble) is that he gets out past the 30.

If that play is made, Skelton never throws the next pass. His numbers are 3/9 for about 130 yards and a TD. Unfortunately, that missed play led to the interception.

So, once again, in a game that the Cards were really outplayed, they had yet another shot to win.

This is why I am not too worried about the rest of the season. even when they play poorly, it comes down to the execution of a few plays. If they make one or two of those plays, they win, they're 5-1 and we are all very happy again.

Unfortunately, when I looked at the film, it was another punch to the gut. LSH normally makes those plays. Alas, it falls in the category of "would've, could've, should've."

Cardinals Vs. Bills postgame reaction: 'We shot ourselves in the foot'