Share All sharing options for: Cardinals Vs. 49ers ticket preview

The Arizona Cardinals play host to the division rival San Francisco 49ers on Monday Night Football this week, in a huge contest for both teams. Not only does this game have major implications for the race for the NFC West crown, but it is also arguably the tipping point for a once 4-0 Cardinals team that will drop to a disappointing 4-4, should they lose. 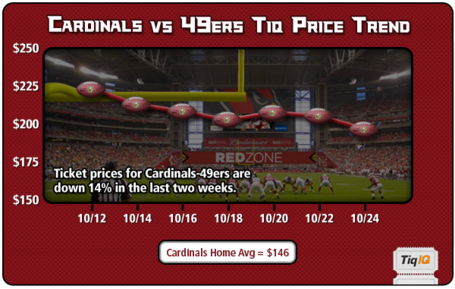 Arizona Cardinals tickets for this NFC West showdown are currently selling for $194 per seat, 33% above the Cards home average and the second most expensive Cardinals home game of the year. The only game in Glendale with higher priced tickets will be their date with the Chicago Bears on December 23rd. Luckily for Cardinals fans, ticket prices have gone down 14% over the last couple weeks and there should be some decent deals available with the get-in price currently sitting at $60.

Overall, this rivalry has clearly spiced up, and Arizona's hot start this year and San Francisco's rise ever since last season have a lot to do with it. The matchup in AZ has increased in price by 39% from last season, and 61% from 2010. Obviously fans are starting to take notice that both teams have elite defenses and that this is no longer a locked-in blowout.

Regardless of the potential negatives that could come with a loss, this is a huge game for the Cardinals, and a solid test for the 49ers. Both teams boast top-ranked defenses that stuff the run and don't allow many points, while their offenses tend to struggle a bit. In recent weeks, the 49ers have struggled primarily in the passing game with quarterback Alex Smith, while the Cards have had a difficult time at quarterback for the majority of 2012, and have recently been getting gashed on defense against the run.

Slacking against the run won't be an option for Arizona this week, however, as they have to face Frank Gore and the league's top-ranked rush offense in front of the nation. On top of that, their inconsistent offense will have it's hands full in trying to stop a three-game losing streak.

The 49ers have the edge on paper due to the better overall defense and a historically more consistent offense, but Arizona didn't get to 4-0 by accident. Expect it to be another classic nail-biter on Monday Night Football this week.