Superbowl Sunday is here! But even the biggest day in the football world won't stop the Caption This! competition. This week, the winner took the round by a far margin, with 2nd Place being a 3-way tie.

Hit the jump for the winner, his caption, the runner-ups, the rules to Caption This!, this week's picture, and of course, the "Table of Winners".

Caption: Brees: Hey Larry, Look right behind you. Can’t beat that, right?
Fitzgerald: …Even I gotta admit, That’s a BIG one.

Congratulations to all of them! And now, the updated table:

And finally, here is this week's picture: (Although it's a little blurry) 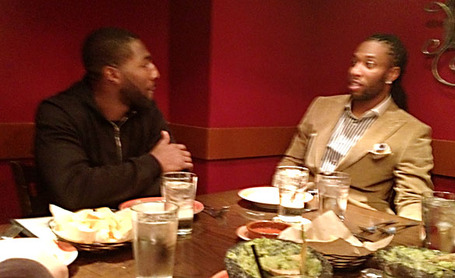