John Skelton By The Throws Against The Oakland Raiders

Share All sharing options for: John Skelton By The Throws Against The Oakland Raiders

We looked at what Kevin Kolb did pass attempt by pass attempt on Tuesday. After a quick and effective drive, he was hesitant. John Skelton had only three throws in the same game and he completed them all. But even still, let us look at his decisions and how he did.

This won't take long, and sorry it took until the day before the next game to get this done.

Throw 1: Skelton faces only a four-man rush and appears to have Todd Heap as his first read. He goes with that read and makes the accurate throw with a quick decision. I like how he throws the ball before Heap has looked for it. Good throw. 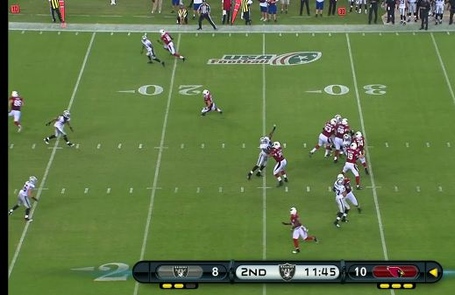 Throw 2: Again facing only a four-man rush, Skelton goes with his first option -- Rob Housler. It is important to note that the Raiders attempted the same line stunt that was successful against D'Anthony Batiste to result in a sack of Kolb (the safety if I recall). Batiste recognized it to give Skelton better protection. Again, the ball is throw well and right on the money. You can see that he was looking for Housler from the time the ball was snapped.

Throw 3: This was the touchdown to Anthony Sherman. The Oakland defender screwed up here. The result was six points. The linebacker decides to rush Skelton instead of staying with Sherman, leaving the fullback wide open in the flat and he walks in for the score. Skelton recognized the mistake immediately (an easy call) and got him the ball.

Skelton did what he needed to He saw his read and made the throw. He was quick to make the decision. Anything to be concerned about? Perhaps one. He made the throw to his first option. It was there. As a result, he wasn't looking anywhere else. What we don't see is his going through progressions. That isn't his fault. He was able to make the throw to his primary target. However, he does lock on to the target.

In no way do I discount the fact that he did great there in those three plays. All this means is that we did not see one thing that we hope he can do, and that is look off his primary target if it isn't there and make a secondary throw that results in a good play.

But he recognizes the read and throws the ball, as opposed toe Kolb, who looks hesitant. Granted, Kolb looked good on his initial read as well in that first drive.

The game against Tennessee hopefully will give us a chance to see Skelton make that secondary read and put the ball where it should be. Also, we need to see how he throws under pressure, since we know that is an inevitability once the regular season comes around.