It's no secret that the Cardinals have a weak offensive line, even at the best of times, but this weeks bonehead play is a great example of just how bad it can be. We need look no further than the first two plays of the Cardinals first offensive drive. John Skelton was sent out to play against the Titans first string defense with a question mark filling both offensive tackle positions. The starting LT was virtual rookie #67 DJ Young, who spent the 2011 season on the Cardinals practice squad after being an undrafted free agent. The starting RT was eighth year pro #74 D'Anthony Batiste, whose last live action was playing in Denver in the 2011 season before being cut 10/16 and then signed to Arizona 11/16 where his only action was on the Special Teams unit in the season finally.

As John Skelton lined up behind the starting offensive line in the hopes to start quickly and end the quarterback competition he had no idea that seven professional NFL players would be unable to protect him from four defensive players. The full play breakdown after the jump.

The set up: 13:22 1Q, Cardinals first possession. The Cardinals line up in an offset I formation with TE Jeff King lined up left to help LT DJ Young. The WRs are Andre Roberts to the left, and Larry Fitzgerald on the right. In the backfield is FB Anthony Sherman and RB Beanie Wells. The OL from left to right, LT DJ Young, LG Daryn Colledge, C Lyle Sendlein, RG Adam Snyder, and RT D'Anthony Batiste. To Mike Millers credit the play call is designed to ease Young into the game with help from one of the better blocking TEs in the league with Jeff King lined up next to him.

The defense sets up with a base 4-3 defense. 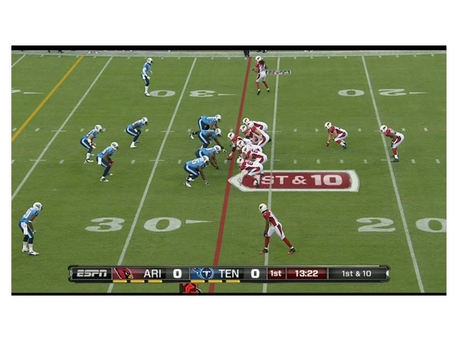 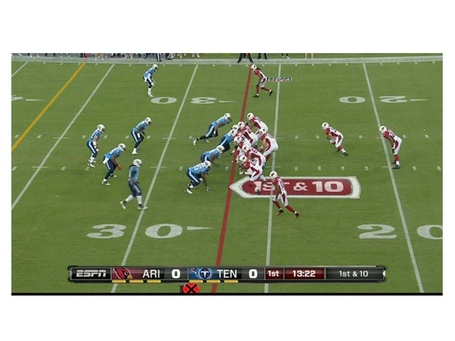 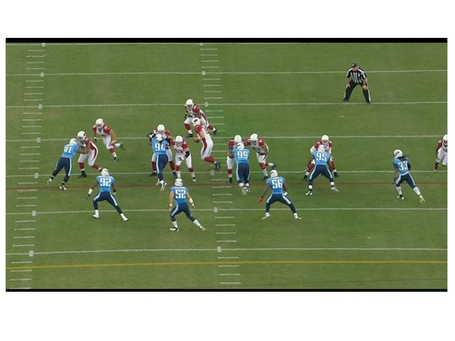 13:21 QB Skelton keeps the ball and RB Well moves to pass protection from the play action. FB Sherman rolls out be the Skelton's check down in the flat. WRs Fitzgerald and Roberts run their routes. TE King is keeping his block, but is losing ground. LT Young is no longer engaged with a defender LG Colledge pursues RDT Casey who is shifting to the whole being created on the right side. C Sendlein is tripping and RG Snyder has given up four yards to LDT Marks. RT Batiste is still engaged with LDE Morgan and RB Wells looks to engage Morgan to help provide pass protection. 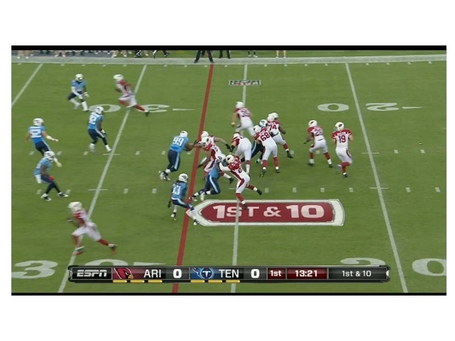 13:20.5 (Half a second later) QB Skelton makes his reads, looking first to WR Fitzgerald. RB Wells moves to chip Morgan six yards behind the line of scrimmage. Snyder and Batiste and being man handled and the pocket is breaking down on the right side. C Sendlein is not engaged with a defender. LG Colledge loses contact with his man and Casey is now free to rush Skelton. LT Young is turning to support TE King with blocking Wimbley, but King is losing the block. 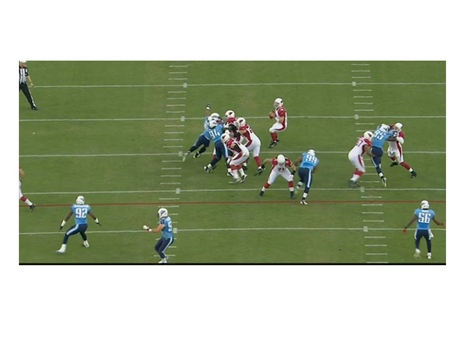 13:20 Titans Morgan is now behind Skelton after pushing Batiste into Wells and negating his block. Casey continues to rush Skelton unblocked. King is giving ground and but continues to block. LT Young is now looking back at Wimbley as he pushes King backwards. FB Sherman is open in the flat and is looking back for the ball and Skelton sensing pressure tries to move up into the pocket. 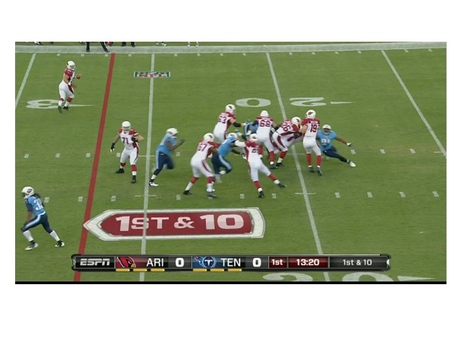 13:19 RT Batiste continues pushing Morgan until they both fall down but RG Snyder has been pushed back eight yards and his defender is now grabbing Skelton. QB Skelton is grabbed and tries to throw the ball to FB Sherman in the flat to avoid the sack but Casey is now half a second from sacking Skelton. LG Colledge and LT Young are both unengaged with defenders. 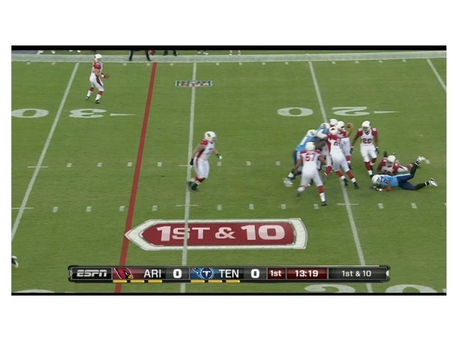 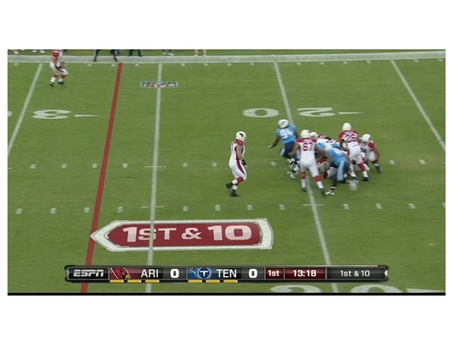 The result is a loss of eight yards, seven defenders owned by the Titans four man front.

The boneheads of this play were everyone who was supposed to be providing protection with almost two-to-one dedicated pass protectors they were beat. While it is understandable that this was Young's first play as the starting LT, and he was going up against the Titans starting defense he was provided blocking support from TE Jeff King, but it looks like he engaged the wrong defender and left King to have a one on one with the DE. It looks like Sendlein forgot the play and at first moved into the second level as if to provide run blocking, and Colledge was beat even with help from Young. It was Young and Colledge's man that gets half of the sack, after the double team.

It is incredible that in the third preseason game, which is supposed to be the dress rehearsal, the Cardinals have seven men beat by four.

The next play, basically the same thing happens but King runs up the seam, Skelton is able to get the ball away to King, but King trips and the ball is intercepted. I think Skelton for overthrowing and King for tripping need to both take accountability for that. That is not how you start your dress rehearsal, and it's not how you protect your QB. It's no wonder that Whiz can't make a decision at QB when you can't evaluate your talent until after they've been grinded into the dirt for a quarter before the next guy comes in.

What was your bonehead play?